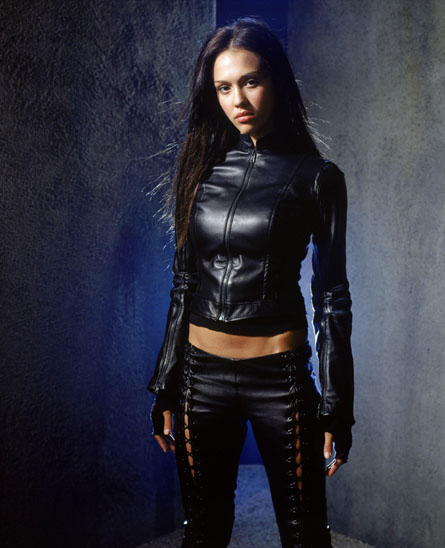 Heaven... must be missing an angel...

A dramatic show set in a future of political, economic, and moral collapse that results when a shadowy terrorist group wipes out America's economy with a massive electromagnetic pulse. A genetically enhanced Super Soldier X5 prototype named Max escapes from military confines and dwells amidst the decadent underground street life of 2019 Seattle while making minimum wage at a bike messaging service called Jam Pony and occasionally stealing. Searching for her brothers and sisters who were scattered in the aftermath of their escape from Manticore in 2009, Max encounters Logan Cale aka Eyes Only, an idealistic cyber-journalist battling repression and corruption in post-apocalypse America. All this with Jessica Alba running about in leather pants.

Eventually, Logan calls her to the highest part of her being and she becomes his samurai, taking on the ruthless power-brokers of the new millennium. Max and Logan's odyssey leads them closer to the secret of her past, deepening and complicating their relationship in the process.

At the beginning of the second season, Max frees more of Manticore's experiments, and the show goes from being focused on Logan and Max to more of an ensemble show. For some fans (especially those coming back to watch it for Jensen Ackles), the story of Alec (a recently freed clone of Max's Serial Killer brother Ben) in the second season was more interesting than the main plot. Fans of the first season and the original characters resented the dramatic transformation of the show's format and the focus on new characters over the series leads. There is still heavy tension between the two factions.

After the show's cancellation, its intended plot was continued in the novels Skin Game and After the Dark. There was also a prequel called Before the Dawn and a book called The Eyes Only Dossier with extra information about the show's universe and new subplots.

Co-created and produced by Aliens and Terminator director James Cameron (Cameron also directed the final episode, the only scripted work he shot between Titanic and Avatar); what causal relationship exists between this series and Cameron's intent to turn the similar anime Gunnm into a live film is unclear. As well as Gunnm, the series has also been accused of excessive similarities with Robert A. Heinlein's Friday, also about a genetically engineered woman in a future where the United States has broken up.

Side note: This series got dropped (by Fox) in its second year in favor of Firefly, causing some fan-wars on the internet. The fact that Firefly was also dropped/mishandled by that network is a lesson in Executive Meddling. What's more, the Dark Angel cast & crew were told by Fox that they had been picked up for a third season only two days before it was officially announced that they were cancelled instead.

Tropes used in Dark Angel include:

Retrieved from "https://allthetropes.org/w/index.php?title=Dark_Angel&oldid=1826152"
Categories:
Cookies help us deliver our services. By using our services, you agree to our use of cookies.