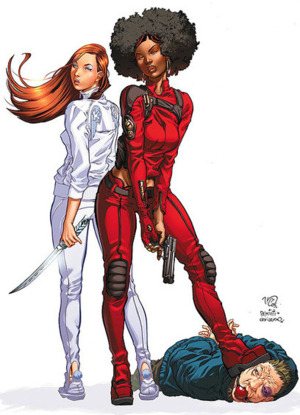 For some reason, female buddy-shows are rather widespread, especially in Anime. This trope refers to adventure series starring two rather competent women with contrasting personalities—compare with Betty and Veronica, Red Oni, Blue Oni, Tomboy and Girly Girl, and Bifauxnen and Ladette. They're not usually romantically involved with each other and generally Just Friends. In recent years, however, it has become difficult to avoid this implication, and a few shows keep enough Subtext to placate such fans or outright encourage it.

In contrast, female buddy movies are extremely rare, possibly because Most Writers Are Male.

More than two Lovely Angels eventually become known as an Amazon Brigade. Everything else of the above stays the same.

Examples of Lovely Angels include:

Retrieved from "https://allthetropes.org/w/index.php?title=Lovely_Angels&oldid=1882062"
Categories:
Cookies help us deliver our services. By using our services, you agree to our use of cookies.