Think Nothing of It 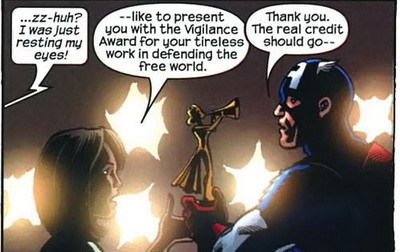 "When you have done all you have been commanded, say, 'We are unprofitable servants; we have done what we were obliged to do.'"
—The Bible

After his heroic feat, the person he's rescued or helped, or a whole crowd of spectators, gushes over The Hero.

His response? It may be acted, or spoken, or merely thought, but it's summoned up in a Stock Phrase: "Think Nothing of It" or "Don't Mention It". If this is his job, or routine to him, "All a Part of the Job". If more tangible gratitude is forthcoming, Keep the Reward will appear.

Motives vary widely and may characterize in more detail than the heroism alone. Many of them are not mutually exclusive:

Catchphrase of the Humble Hero.

The Miles Gloriosus is incapable of this, or even understanding that someone might think better of him for it.

The Glory Hound, even more nastily, is incapable of this regardless of what has been suffered by others to win the victory, until he is certain he has secured the glory for himself, whereupon he may try false modesty. And he rather looks for it in his subordinates. The Super-Trope Glory Seeker often finds it hard to choke out when the praise is not merited—and never does when it is.

A Smug Super will be very vocal about how it was nothing... because it was a trivial effort on his part that shows how much better a hero he is, and should be thanked profusely for it by all.

The Rule of Funny decrees that some people, on hearing this, will act Literal-Minded—always, of course, when the person doesn't really mean it.

Much like Don't You Dare Pity Me! for positive achievements.

Compare Grudging Thank You, Heroic Self-Deprecation, What You Are in the Dark, The Real Heroes. Contrast Entitled Bastard.

Examples of Think Nothing of It include:

"What's happened here?" "Nothing. Nothing at all!"

Akane: You saved me, Ranma. Thank you.
Ranma: It was nothin'.

Kathy: Thanks. You shouldn't have...
Pandora: It was nothing. And when I say nothing, I mean...

Sonic: Um, thanks for that save there, Tatl.
Tatl: Think nothing of it.

Gordon: You know, I never said thank you.
Batman: And you'll never have to.

Warden: This country is safe again, Superman, thanks to you.
Superman: No, don't thank me, Warden. We're all part of the same team!

Charlie: Well thank you.
Gust: Ah, it was nothing.
Charlie: Well it's a nice bottle of scotch, must've been hard to get.
Gust: No, doubling the budget was nothing. Ten million dollars for covert ops against the Russian army is meaningless. What are you, an infant?

Zaphod: "That’s very good thinking, you know that? You’ve just saved our lives."
Arthur: "It was nothing really..."
Zaphod: "Oh was it? Oh well forget it. OK computer, take us in to land..."

The Twisted Man nodded. Perhaps he was not human enough to say that it was nothing, or perhaps he was too human.

"You Tribe," replied the Lord of the Unfleshed as though no other explanation was needed.

The Patrician: Oh, and do bring your men in tomorrow. The city must show its gratitude.
Vimes: It must what?

Gabrielle: Ares-- when you gave up your immortality to save me and Eve-- that was-- that was quite a sacrifice. Thank you.
Ares: If Eve had died - and Xena lost her power to kill gods - then Athena would have killed Xena. So I was saving Eve to save Xena. You were an afterthought.
Gabrielle: Thanks, anyway.

McCoy: Spock, er, I know we've, er, had our disagreements. Er, maybe they're jokes, I don't know. As Jim says, we're not often sure ourselves sometimes. But, er... what I'm trying to say is...
Spock: Doctor, I am seeking a means of escape. Will you please be brief?
McCoy: What I'm trying to say is, you saved my life in the arena.
Spock: Yes, that's quite true.
McCoy: [Indignant] I'm trying to thank you, you pointed-eared hobgoblin!
Spock: Oh yes, you humans have that emotional need to express gratitude. "You're welcome", I believe is the correct response.

Parker: Buffy, I don't know what to say. After the way I've treated you, and now I owe you my life.
Buffy: It's nothing.
Parker: It's everything. You're everything. And I'm going to do whatever it takes to get you to forgive me. Do you think that you might--
[Buffy snaps out of it at the sight of Parker chatting up another girl]

Ragueneau (to Cyrano) Know you who might be the hero of the fray?
Cyrano (carelessly): Not I.

Auron: I suppose I should thank you.
Sora: Not at all.
Auron: Fine.
Sora: I mean, sure, you could thank us a little...
Auron: You should say what you mean.

Most of the time, insisting on more will only get you more money, where you already have Money for Nothing, whereas the refusal bonuses come as experience or rare items. Probably an effort to encourage the good choices, whatever the reasons may be.

BioWare employs this fairly consistently throughout their RPGs.

O-Chul: Thank you once more for all that you have done.
Vaarsuuvius: Please, do not remind me of all that I have done.

I'm not interested in money or fame... I don't want to be on display like an animal in a zoo. I'm not a hero of mathematics. I'm not even that successful; that is why I don't want to have everybody looking at me."

"Jon Stewart's just a comedian the way gunslingers in old westerns are really peaceable sodbusters who hate all that bloodshed and all that killin' but finally have to strap on them six-guns and march on into town. Heck, he'd go back to telling jokes if he could, but he can't, not with hired guns like Tucker Carlson and Jim Cramer around..."