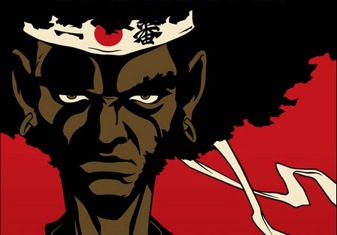 Traditional headgear worn in Japan, known as hachimaki, is a strip of cloth tied around the head. Think Daniel-san from The Karate Kid. It is often decorated with a written slogan (frequently Nippon Ichi, "No. 1 in Japan"), serving as a sort of tee shirt for the forehead. Commonly worn by warriors, protestors, students studying for exams, or anyone who needs to keep sweat from dripping into their eyes be serious and focused on something. Or by drunk salarymen (see Necktie Headband).

An iconic real-life use of this trope was in the fighter pilots of Japan during World War II, when they wore bandanas bearing the word "Kamikaze" upon them, which up until that point, had been a reference to the "Divine Wind" that drove off the Mongol invasion of Japan centuries earlier.

The act of putting one on is generally used as an expression of willpower and a change in mood, not unlike Let's Get Dangerous, but it doesn't have to involve violence. Donning a headband with a slogan or motto relevant to your training before undergoing Training from Hell is generally the straight use. It occasionally sees What Do You Mean It's Not Awesome? moments, however, in being used to "pump up" a character's willpower before significantly more mundane things, like scrubbing out one's stinky toilet.

Examples of Hachimaki include: