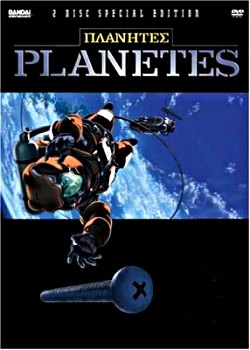 Garbage collecting... IN SPACE! Because in space, bolts screw you!

Planetes is an anime series, based on a manga series of the same name, that provides a realistic and dramatic view of life in space in the near future. The principal cast are the "Debris Section" of the Technora corporation, space trash collectors that are charged with the prevention of deadly orbital collisions with free-floating junk.

By 2075, the depletion of oil reserves has caused mankind to turn to space to solve its increasing demand for energy, through the mining of Helium-3 isotope deposits from the moon. With the increase in traffic, the accumulation of debris in Earth orbit has caused a number of spectacular and deadly accidents, as even a tiny piece of debris at orbital velocity (for reference, orbital velocity for an object in LEO[1] is about 7 and a half kilometers per second) can take down a spacecraft. So, our "heroes" (really just blue-collar astronauts and administrators) must collect and salvage this space junk.

Please don't read the examples if you ever plan on watching the show. Just don't.

Tropes used in Planetes include:

This show is notable for not containing examples of: