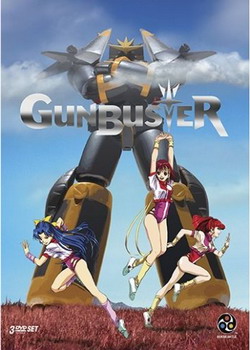 Saving the Earth with hard work and guts!

A six-volume OAV from 1988, directed by Hideaki Anno, that really put Gainax on the map, and a series fondly remembered by old school otaku. While it's a bit of a rough diamond, viewers today can still see why it stood out then, where it led Gainax, and where Gainax took the ideas they started in it. It's also considered somewhat of a spiritual predecessor to Neon Genesis Evangelion and Gurren Lagann, as it contains a lot of elements that would later be used in those shows.

Gunbuster (Top o Nerae!, the Japanese title) serves notice that the show will borrow from many sources and genres. It is a mashing-together of Top Gun and a famous Tennis Manga/Anime Ace o Nerae! (Aim for the Ace!). As might be expected from this, episode 1 opens at a girls' high school that trains Humongous Mecha pilots to battle the alien monsters that destroyed the Luxion Fleet six years before.

The central character is Noriko Takaya, daughter of the admiral in command of the lost fleet and one of the newest students. Despite having plenty of motivation, she is clumsy, not terribly mature, and completely lacking in self-confidence. Like all the students, she is in awe of Onee-Sama ("Big Sister") Kazumi Amano, the star pupil of their school -- especially after she defends Noriko from a group of bullies and gives her some advice (and a headband). Unfortunately, school becomes even harder after "Coach" Ohta, their new instructor, serves up Training from Hell for everyone. Oh, and Kazumi carries a torch for him, a big one.

Noriko's life becomes harder still when "Coach", who is also the sole survivor of the Luxion fleet (Noriko's father saved his life), sees something in Noriko that no one else does. Because of this, he selects her as Kazumi's partner to graduate early and participate in a secret project -- over all the other students, and the objections of both Kazumi and Noriko. Days of bullying, several speeches, a couple of Training Montages, and one robot Cat Fight later, Noriko and "big sister" are shipping out for advanced training in earth orbit. Here they find a rival, "genius" Soviet pilot Jung Freud, who starts by challenging Kazumi to a duel, then settles into a snippy sort of friendship.

At this point a Top Gun/Sports-themed Mecha show takes a left turn into The Forever War. Admiral Takaya's flagship comes barreling through the solar system at near light-speed, and Noriko and Kazumi are chosen to intercept it. It's been years since the battle that wrecked the ship - but, thanks to time dilation, it's only been hours since then aboard the ship. Noriko runs through the ship, hoping to find her father, but jeopardizing their chances of getting off the ship in time.

That's the first two episodes. The middle two show our heroines shipping out with the fleet, tapped to try out the new "Buster Machine" giant robot. If Noriko's angst and fear doesn't derail them first.

Episode Five is Kazumi's turn to get put through the wringer. She's decided she loves "Coach" Ohta. Unfortunately, he's dying of radiation sickness, and their next mission will take them away for years of earth time. Fortunately, Noriko's grown enough of a backbone to keep her in line.

The Final episode is elegiac and deeply angst-ridden (not that the previous episodes were a barrel of laughs). In fact, it's so serious that it was animated in black and white. "Big Sis" Kazumi is now "auntie" Kazumi, teaching the children of her old classmates at her old school. She gets the call to go back into space for a final mission to destroy the aliens once and for all (using a bomb built from the planet Jupiter. Yes, you read that right). She rejoins Noriko and Jung, who have been in space all this time and have hardly aged at all. Sacrifices will be made, angst will flow, people will forget how to spell, and you'll know beyond doubt that you've seen something made by genuine fans of the genre(s).

What words can only hint at is the sheer sincerity and passion put into all these rather hoary old tropes. The plotting is not that well paced and all over the place (writer Toshio Okada has commented that he put in every idea he had). Much of the characterization is perfunctory (and the archetypes used are from another age, especially Ohta and the other military men). The science is silly and the dialog hoary, but the big moments pull you in, and the angsty ones will make you cry (the climax of episode 6 can pull tears from some of the toughest otaku). More than anything else, it showed that the team from Gainax could pull off "popular" anime (their debut work Royal Space Force: The Wings of Honnêamise had run into a buzzsaw called Nausicaa of the Valley of the Wind) and that they would be a force to be reckoned with.

In 2004, Gainax released a sequel series, Diebuster, as its 15th anniversary project. The two series have converging endings. This was released in R1 as Gunbuster 2.

Tropes used in Gunbuster include:
Retrieved from "https://allthetropes.org/w/index.php?title=Gunbuster&oldid=1898705"
Categories:
Cookies help us deliver our services. By using our services, you agree to our use of cookies.