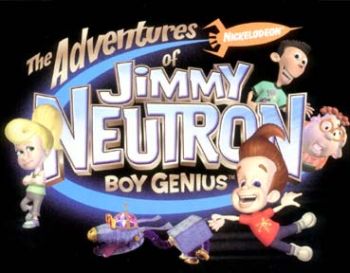 Based on the movie Jimmy Neutron Boy Genius, this CGI Nickelodeon series follows the adventures of Jimmy, a preteen genius who creates inventions in his underground lab. He, his robot dog Goddard, and fellow grade-schoolers Carl, Sheen, Libby and Cindy (and occasionally extra characters like Bolbi or Betty) save Retroville/the world from invention-induced disasters just about every episode. The show lasted from July 2002 to November 2006.

Of interest is that the film and television series was made from consumer-grade programs. The show strains to compensate for the lack of raw technical power with very clever visuals. As per the very nature of its premise the "science" was either never explained or clearly made up.

It was a fairly successful show, running for three seasons. It was involved in a few crossovers with The Fairly OddParents and in later Massive Multiplayer Crossovers in the Nicktoons Unite! series and Nicktoons MLB.

Feel free to further amuse yourself by checking out the Character Sheet or Fanfic Recs.

A Spin-Off has been made, Planet Sheen.

Tropes used in The Adventures of Jimmy Neutron: Boy Genius include:
Retrieved from "https://allthetropes.org/w/index.php?title=The_Adventures_of_Jimmy_Neutron:_Boy_Genius&oldid=1913082"
Categories:
Cookies help us deliver our services. By using our services, you agree to our use of cookies.