Defiant to the End 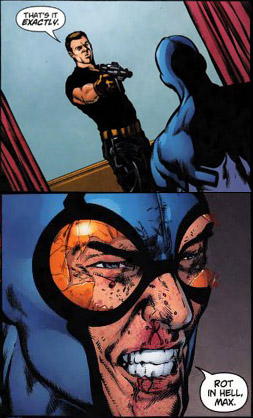 Someone has been captured and incapacitated. What do they do, cooperate with their captor or beg to be spared?

They make it abundantly clear that they have absolutely no respect for their captor. They'd never Kneel Before Zod in a million years, and they're not afraid in the slightest to say so. Sure, Baron Bloodlust could kill them where they stand if he decided to, but you wouldn't know that from the insults. This is done when a defeated character laughs or snarks at the one who beat them, often when they're literally in no position to, such as broken in pain on the floor or behind bars. This could even be for something that has absolutely nothing to do with them. They just can't let the other character get a complete victory.

This can be an important part of the end for the Doomed Moral Victor: if you can't die fighting, you can at least die verbally sparring. Or, failing that, die insulting the villain's mother. They may be down, and they may be out, but they'll still lose with dignity.

By taking that of the person who beat them.

Some can pull this off without dying, with their taunts serving to throw the captor off-balance. Either this angers them into making a mistake that will enable escape, or to distract them to give the Big Damn Heroes time to do their thing.

Note that this isn't exclusive to heroes, as Evil Is Petty, and can't resist doing the same. Nor is this a Death trope. It's the insult that's the most important part.

Compare Hannibal Lecture, I Shall Taunt You, Did You Just Flip Off Cthulhu?, You Cannot Kill an Idea. A Last Stand is the military version of this trope, where the heroes and maybe a friendly army will fight against the enemy in a battle they know they can't win. Villainous Valor is a similar trope, but with the villain being defiant to the end. The polar opposite of Ain't Too Proud to Beg. Contrast with Screw Your Ultimatum, where the defiance comes before the fight and where the outcome is still in doubt.

Examples of Defiant to the End include: