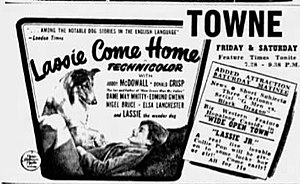 Lassie Come Home is the first and what many consider to be the best of several generations of Lassie movies and television programs which were adapted from novels by Eric Knight. The film's rich color cinematography that captures the lush countryside was nominated for an Academy Award.

Young Joe (Roddy McDowall) is distraught when his father, an unemployed English coal miner (Donald Crisp), is forced to sell Joe's beloved collie Lassie (whose real name was Pal) to pay the rent. The buyer (Nigel Bruce) takes Lassie home to Scotland and his daughter (Elizabeth Taylor), but after several attempts, Lassie manages to escape and sets out on a perilous journey back to Joe.

New York Times reviewer Bosley Crowther noted that the story is told "with such poignance and simple beauty that only the hardest heart can fail to be moved."

Lassie Come Home was added to the National Film Registry in 1993.

Retrieved from "https://allthetropes.org/w/index.php?title=Lassie_Come_Home&oldid=1921850"
Categories:
Cookies help us deliver our services. By using our services, you agree to our use of cookies.