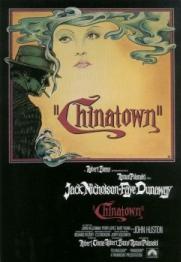 Walsh: Forget it, Jake. It's Chinatown.

One of the seminal Neo-Noir films, and considered by many to be among the best of Film Noir films in general, Chinatown was written by Robert Towne and directed by Roman Polanski. The film stars Jack Nicholson, Faye Dunaway, and John Huston. It is DARK.

Chinatown tells the story of Jake Gittes, a former cop turned Private Detective living and working in 1930s Los Angeles. Gittes is hired by a woman claiming to be Evelyn Mulwray, the wife of the city's water commissioner to prove that her husband is having an affair. It seems like a simple enough job. But it isn't. The woman who hired him isn't the real Mrs. Mulwray. Then the water commissioner ends up dead and the real Mrs. Mulwray hires Gittes to find out what really happened. He may think he knows what he's dealing with. But he doesn't.

Fun fact: Chinatown is a production of Penthouse Films. (I.E., the pornographic magazine.)

For the kind of place, see Friendly Local Chinatown. Don't confuse this with Big Trouble in Little China, however tempting it may be.

Tropes used in Chinatown include:

Jake Gittes: I just wanna know what you're worth. More than 10 million?
Noah Cross: Oh my, yes!
Jake Gittes: Why are you doing it? How much better can you eat? What could you buy that you can't already afford?
Noah Cross: The future, Mr. Gittes! The future.

Loach: What happened to your nose, Gittes? Somebody slammed a bedroom window on it?
Jake: Nope. Your wife got excited. She crossed her legs a little too quick, you understand what I mean pal?.