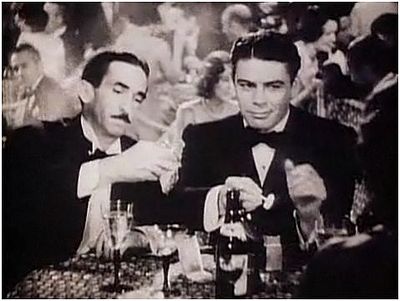 Howard Hawks's 1932 masterpiece Scarface is a dark, brutally violent film depicting the horror of mob intimidation. Paul Muni gives his best performance as the thug Tony Camonte, who gradually insinuates himself as the leader of a small ring of hoods, wooing away the boss's girl (Karen Morley) and further terrorizing his rivals with the latest in gang warfare, the tommy gun. But as Tony's thirst for power grows, so does his recklessness and temper, increasing his already frightening obsession with protecting his sister (Ann Dvorak) as well as sending him on a collision course with the law that won't end with a clean getaway. Hawks reverses the usual structure of the gangster tragedy: Camonte's not driven by his ego to challenge the world so much as to embrace its natural chaos and violence.

Scarface was added to the National Film Registry in 1994.

Not to be confused with the 1983 film of the same name.

Tropes used in Scarface (1932 film) include:

Retrieved from "https://allthetropes.org/w/index.php?title=Scarface_(1932_film)&oldid=1922097"
Categories:
Cookies help us deliver our services. By using our services, you agree to our use of cookies.