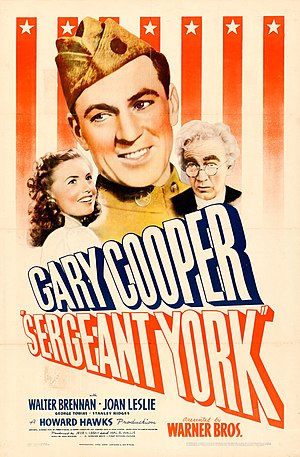 Sergeant York is a 1941 American biographical film about the life of Alvin C. York, one of the most decorated American soldiers of World War I. Directed by Howard Hawks and starring Gary Cooper (who won the Oscar for Best Actor) in the title role, the film was a critical and commercial success, and became the highest-grossing film of 1941. The film also won Best Film Editing and was nominated in nine other categories, including Best Picture, Director, Supporting Actor (Walter Brennan), and Supporting Actress (Margaret Wycherly).

In 2008, Sergeant York was selected for preservation in the United States National Film Registry by the Library of Congress as being "culturally, historically, or aesthetically significant".

Tropes used in Sergeant York include:

Retrieved from "https://allthetropes.org/w/index.php?title=Sergeant_York&oldid=1921872"
Categories:
Cookies help us deliver our services. By using our services, you agree to our use of cookies.