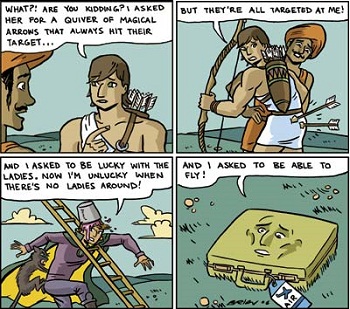 Generally speaking, a Literal Genie will make logical, if basic interpretations of a wish. Nothing more and nothing less than what the wish explicitly states. This is so that when a wish backfires, we can laugh at the foolishness of whoever made the wish, as opposed to the genie, who's just doing their job.

Sometimes, though, the literal interpretation just isn't enough. Try as we might, there simply aren't that many wishes which can be literally interpreted to mean "Turn me blue." So when the humiliation really needs to pile on, the Jackass Genie has to make an appearance.

What differentiates the Jackass Genie from the Literal Genie is sheer malice. This genie has it in for whoever has the misfortune of being its master, and will make whatever bizarre interpretation is necessary to make the master's life a complete living hell. A Literal Genie will grant the wish as is, with no additional magic good or bad. The Jackass Genie will be the precise opposite of the Benevolent Genie, inserting the absolute worst, but still technically valid, version of any wish.

In short, you just can't win; no matter what you wish for, the Jackass Genie will find a way to twist it so you end up worse off. And taking the Literal Genie approach of making your wish very specific is nothing but a trap when dealing with a Jackass Genie. Unless you know a rule that he absolutely has to follow, he'll just move the goalposts and screw you over anyway. "Oh, the words you used mean something else in a very obscure dialect in Another Dimension." Even worse is when he grants your wish normally, and then sets you on fire "because you didn't say you didn't want to be set on fire."

A variation on the theme is for the Jackass Genie to interpret anything you say as a wish, even if you didn't intend to make one. Suffice to say, never say "I wish I were dead" when this particular genie is within earshot. Your "wish" will be granted. Even the Literal Genie tends to have a tenuous grasp of the concept of hyperbole.

As you can plainly see, oftentimes the Jackass Genie just seems to be taking cheap shots at characters who are literally helpless before them. As a result, expect the Jackass Genie to be the clear villain in whatever work of media it appears in. The Literal Genie can be excused somewhat if they're just naturally ditzy or are trying to teach you a lesson about being careful what you wish for, but the Jackass Genie can lay no such claim. If there is any lesson to be learned with them, it might be "if an offer seems too good to be true, it is"—after all, this genie acts like a supernatural Con Man, and you always had the option to walk away.

Genie jackassery is a natural repercussion of the original mythology since most wish-granting djinn were demons imprisoned and enslaved by sorcerers (usually this specific one) and are rather unhappy with their servitude.

Has nothing to do with Johnny Knoxville and a bottle.

Compare with Deal with the Devil.

Examples of Jackass Genie include:

Retrieved from "https://allthetropes.org/w/index.php?title=Jackass_Genie&oldid=1951163"
Categories:
Cookies help us deliver our services. By using our services, you agree to our use of cookies.