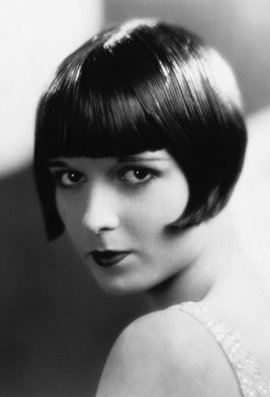 Louise Brooks wasn't the first actress to wear a bob cut, but she popularized the style by wearing it in her films in the 1920s and 1930s.

A type of haircut, usually for women, of short-to-medium length with sharp lines. In one variety, the hair is cut off at about jaw length all the way around. Alternately, it may taper downwards from the back to the sides. It is similar to but distinct from the bowl cut (a.k.a. pudding basin cut). Some versions are known as a "pageboy" haircut. Fringe/bangs are optional. Can be Fetish Fuel for some men.

A feature of The Roaring Twenties; it's generally non-existent in The West before then, first appearing in fashion magazines in the late 1910s. Initially it was associated with "bad girls", and many men at the time were upset to see their wives and girlfriends with short, boyish hair. Many government and religious institutions opposed the bob and although they couldn't stop it, did their best to make life hell for women who happened to like having short hair. However, by the late 20s the bob was not only accepted, but embraced, even by men. Its heyday was about 1922-1932, but it had a comeback in The Fifties and The Sixties as a popular girl's haircut, but the reputation changed. They were no longer associated with "bad girls" but innocent (at least on the surface) Malt Shop dwelling bubblegum chewing teenage girls that used words like "Dreamboat" and "swell". The association has bounced around since The Seventies back and forth from "trendy" to "dowdy" with the current opinion being trendy but still shaking the dowdy association.

When applied to boys, this might be a subject to Viewer Gender Confusion. Surprisingly, this type of hair, even the longer varieties, was associated with young men between about 12 and 25,

Although many might agree with the unintentional sentiment, there is no connection to Everything's Better with Bob.

Examples of Bob Haircut include:

Retrieved from "https://allthetropes.org/w/index.php?title=Bob_Haircut&oldid=1822675"
Categories:
Cookies help us deliver our services. By using our services, you agree to our use of cookies.