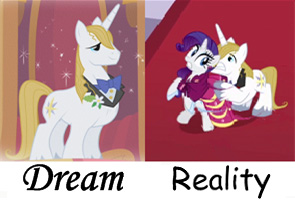 The stallion of Rarity's dreams turned out to be a nightmare.

"I was raised to be charming, not sincere."
—Cinderella's Prince, Into the Woods

The opposite of Prince Charming, a prince, or someone at least of high nobility, who is absolutely wrong for the heroine or Love Interest, because he is boring, shallow, or a total jerk (if not outright The Evil Prince). The princess will either fall for that prince at first, or have an Arranged Marriage with him, but will end up with the commoner guy instead (who might be a prince himself and not know it). This is a common character in Fractured Fairy Tales.

Despite the title, this can happen with princesses. It's just rarer.

A variation on the Romantic False Lead—except here the "prince" is clearly the Wrong Guy First. This may be done to Prince Charming retroactively by Derailing Love Interests.

Not to be confused with Prince Charming Wannabe, which has nothing to do with being a literal prince.

Examples of Prince Charmless include:

"I was raised to be charming, not sincere."

His son, however, ends up being a carbon copy of his dad during the spoiled-brat phase, even going so far as to pull the same stunts on the main character's own children, though thankfully without any kidnapping occurring.