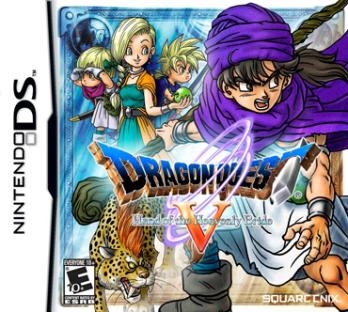 The fifth installment of the Dragon Quest series, and second in the Zenithian trilogy. Spanning some thirty years, you guide the Silent Protagonist from childhood to adulthood as he follows his father's quest for the Legendary Hero. Along the way, he chooses which of two (or three) beautiful young women to take as his bride: his Childhood Friend Romance Bianca, the sweet and sheltered Flora/Nera, or the commanding Debora. She then joins his travels and gives him two lovely children who prove vital to the world's future...

A deeply moving and great story following a boy through his life, with the addition of Mons (for the better, and this game preceded Pokémon) an element not seen in other Dragon Quest games. It is the favorite of Yuji Horii, the creator of the series, and stands as very nearly the best-reviewed and critically-respected game of the entire franchise.

Tropes used in Dragon Quest V include:
Retrieved from "https://allthetropes.org/w/index.php?title=Dragon_Quest_V&oldid=1683643"
Categories:
Cookies help us deliver our services. By using our services, you agree to our use of cookies.