Everything About Fiction You Never Wanted to Know.
(Redirected from Gundam Seed Destiny)
Jump to navigation Jump to search 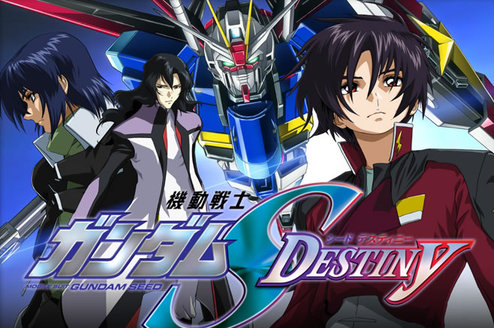 Mobile Suit Gundam SEED Destiny is the sequel to the Mobile Suit Gundam SEED anime series; it is the tenth televised series in the long-running Gundam franchise and the second to be set in the Cosmic Era Alternate Universe. Destiny has some thematic ties to Zeta Gundam, similar to the relationship between Gundam Seed and Mobile Suit Gundam (though less pronounced that SEED's pseudo-remake status); these include SEED characters, now Older and Wiser, reappearing in Destiny, and a very similar Romance Arc in Destiny and Zeta.

Destiny takes place two years after the end of SEED, and follows the story of Shinn Asuka, a young Coordinator and ZAFT pilot. A surprise attack on a ZAFT military base and the subsequent Gundamjacking of three of ZAFT's new Super Prototype Gundams kicks off a sequence of events that results in a second full-scale war between ZAFT and the Earth Alliance. However, things are not as clear-cut as they seem at first, and questions arise over which side of the conflict is really in the right. About halfway through the series, much of the cast from Gundam Seed returns to the spotlight, and the series gradually shifts to their POV, considerably changing the tone of the series.

While Gundam SEED Destiny was wildly popular in Japan, the reaction among English-speaking audiences was much less positive. This largely spawns from the mid-show POV-shift, with Western fans typically preferring Shinn to Kira, and feeling that the latter "stole" the show from the former, while Japanese fans are more fond of Kira and thus much more forgiving of the shift. Some displeased fans take this to extreme levels, and the series has a vocal Hatedom.

Destiny makes numerous appearances in various Video Games, such as the Massively Multiplayer Crossover franchises Super Robot Wars and Another Century's Episode, in addition to the Gundam vs. Series. Its inclusion in Super Robot Wars Z is particularly notable for being widely considered something of a Fix Fic; the story was reworked by Banpresto's writers to fix parts of the plot that had frustrated viewers, and to show both Kira and Shinn as heroes, which was well received by both sides of the Broken Base. Destiny characters and mecha also appear in Gundam Fighter, a Flash-based Web Game featuring nearly the entire Gundam franchise.

Tropes used in Mobile Suit Gundam SEED Destiny include:
Retrieved from "https://allthetropes.org/w/index.php?title=Mobile_Suit_Gundam_SEED_Destiny&oldid=1952717"
Categories:
Cookies help us deliver our services. By using our services, you agree to our use of cookies.