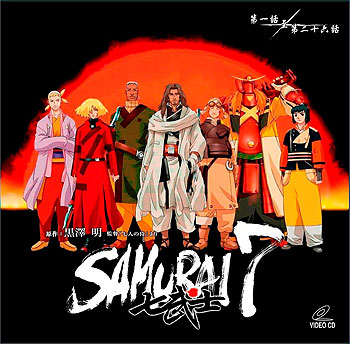 Samurai 7 is an anime remake of Seven Samurai, down to the names of the samurai.

Being an anime retelling, however, it also has Humongous Mecha that get cut in half with katanas.

It is far Better Than It Sounds.

When the Nobuseri bandits prey upon the village of Kanna, the poor villagers -- out of fear of starvation -- send their water priestess to the nearest city to hire as many samurai as possible to protect them. The villagers will offer the samurai all of the rice they can eat in exchange for their services, but what samurai would hire out their swords and their skill for rice?

In the aftermath of a devastating war, samurai strive to find meaning in their lives. It is through protecting the village of Kanna that the seven samurai who take up the villagers' offer find that meaning -- and more.

Now with a character page that needs some love.

Tropes used in Samurai 7 include:
Retrieved from "https://allthetropes.org/w/index.php?title=Samurai_7&oldid=1962779"
Categories:
Cookies help us deliver our services. By using our services, you agree to our use of cookies.