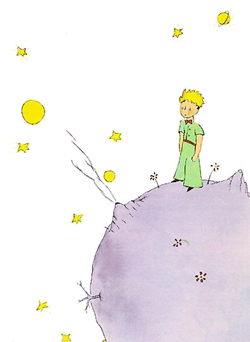 "Once upon a time there was a little prince who lived on a planet that was scarcely bigger than himself, and who had need of a sheep."

A worldwide literary classic (it's been translated into 190 languages), The Little Prince (Le Petit Prince in French) is a 1943 children's book written by French aviator and count Antoine De Saint Exupery. It is the fictional account of a French aviator whose plane crashes in the Sahara desert, a thousand miles from civilization. He is approached by a young prince who requests that he draw him a sheep, which leads into the prince describing to the narrator his life on an asteroid and his travels from planet to planet in search of the meaning of life, the universe, and everything. While the book was written for children, the philosophical content appeals to any adult reader, as during the prince's adventures he encounters analogues of many of the traits of modern humanity, and learns about love and friendship from the plants and animals he meets.

Adaptations have mostly been for the stage, but there's also a 1974 movie musical and a 1979 Claymation short. It also inspired an anime. There is also a new CGI cartoon, airing on French TV, called The New Adventures of the Little Prince.

The book was adapted into a full-length animated movie in 2015. On an interesting note, the concept art was done by Thurop van Orman, the director of The Marvelous Misadventures of Flapjack.

The story is in the public domain, and can be read in its entirety here.

Not in any way a Spear Counterpart to A Little Princess.

Tropes used in The Little Prince include:

The New Adventures of the Little Prince contains examples of:

Retrieved from "https://allthetropes.org/w/index.php?title=The_Little_Prince&oldid=1885845"
Categories:
Cookies help us deliver our services. By using our services, you agree to our use of cookies.