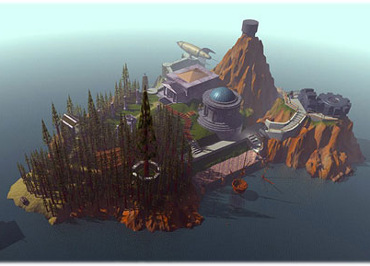 Most games have a premise, dictating an objective which the player achieves through gameplay. Some games, however, have discovering the premise and the objective as part of the gameplay.

Myst was a puzzle-heavy first-person Adventure Game which sparked off a new sub-genre. Developed by the brothers Rand and Robyn Miller in 1993, the game became an unexpected hit, mainly due to its eerie, haunting atmosphere and, for the time, excellent graphics. It was swiftly followed by a host of imitators, most of which are decidedly inferior to the original.

Myst is famous for its mind-bending logic puzzles and lack of character interaction: most of the games feature only a handful of NPCs and very little dialogue. Unsurprisingly, adventure fans are heavily divided over the merits of the game, with most players falling firmly into the 'love' or 'hate' camps. It has even been accused of helping to hasten the 'death' of adventure games, even though many gamers were introduced to the genre by Myst and its sequels.

The late Douglas Adams, upon playing Myst, cheerfully declared the game to be a 'Beautiful Void' due to the lack of other characters or life of any kind (he also created Starship Titanic, which was a game with a very similar premise IN SPACE, with snarky robots).

It is also worth noting that characterisation of 'The Player' (Sometimes called 'The Stranger') is achieved after an interesting fashion in that the few NPC's that play a primary role, Atrus and his family, treat the main character with familiarity that develops as the series progresses. This leads to the player's becoming something akin to their family friend, and subtly integrating the player themself as a character into the world of the game by avoiding dictating the nature of the protagonist.

The Myst games deal with the D'ni civilization, a race of people (not humans) that lived in a cavern under the Earth until their civilization fell a few centuries ago. The D'ni had the ability to write about locations they imagined in special books that could then physically transport a person to the places they described. Atrus, the main non-player character in the games, is one of the last survivors of the D'ni (though he's three-quarters human).

The Myst series has six games:

Recently, an independently produced (but still approved by the Miller brothers) Film of the Book (the Book of Ti'ana to be precise) has been announced. The scriptwriters keep a daily-updated blog about their progress, with some rather odd digressions about their personal lives in connection with the project. A remake of the original game was released in August 2021 for on PC, Mac, Oculus, and Xbox Game Pass. You can watch the trailer here.

Tropes used in Myst (series) include:

Tropes appearing across the series:

Tropes found in Myst and its Updated Rereleases

Tropes found in End of Ages

Retrieved from "https://allthetropes.org/w/index.php?title=Myst_(series)&oldid=1940837"
Categories:
Cookies help us deliver our services. By using our services, you agree to our use of cookies.