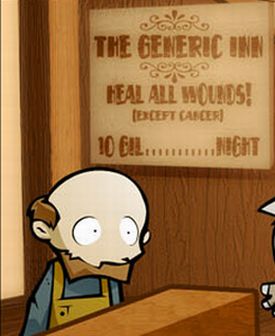 Better than a doctor!

For sword impalements, dragon attacks, meteor strikes, gunshots, any and all of the Standard Status Effects, and even death, nothing beats a nice, refreshing, stay at an inn—guaranteed to cure all your wounds! When Walking It Off proves unsuccessful, you may just have to Sleep It Off instead.

In some games the inns only heal HP and MP, not status effects or death; others heal HP, MP and status effects, but not death. Most go for the whole lot. Sometimes you can save your game there too, resulting in a form of Healing Checkpoint.

The inn is surprisingly cheap, given how powerful it is (although it might get more expensive as the game progresses; apparently innkeepers have a "gouge the rich" philosophy). And somehow, the presence of inns that can heal any ailment for a pittance does not render traditional doctors and medicine obsolete. Of course, this can probably be explained by the fact that the game only considers your party members dead or poisoned on a gameplay level.

Often, the actual inn is optional and a guy standing in the middle of The Very Definitely Final Dungeon asking if you'd like to rest will get you the same effect. Forget about sleeping in your comfy bed on the Global Airship, though. That doesn't count.

This is quickly becoming a Discredited Trope, as modern RPGs are steadily replacing the Trauma Inn with automatic healing at save points. When an inn actually appears in a game with save point recovery, it's either there for a plot event, or it's just decorative scenery.

Note that if the stay at the inn is unexpectedly free, there will be a Cutscene that night. It is highly possible that the Trauma Inn is an off-screen subversion of the Nobody Poops and Bottomless Bladder tropes (Inns have toilets right?).

Expect such inns to be Bigger on the Inside Innside.

See also Healing Spring, which usually provides the same function outside of towns, and Hyperactive Metabolism.

Examples of Trauma Inn include:

Retrieved from "https://allthetropes.org/w/index.php?title=Trauma_Inn&oldid=1897157"
Categories:
Cookies help us deliver our services. By using our services, you agree to our use of cookies.