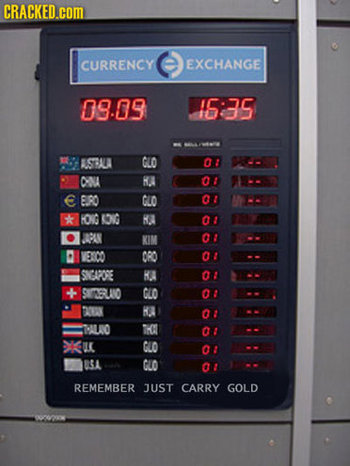 A single form of currency is accepted universally worldwide, regardless of political, social, or technological differences. No matter whether you're dealing with cavemen who speak in broken English or beings from another planet, your money is always good at face value. An almost ubiquitous trope in RPGs and in most other games involving some kind of economy.

The currency in question often has a generic name that implies no place of origin (often just "gold" in fantasy and almost always "credits" in science fiction) and as far as is observable by the player, is spontaneously generated in indefinite quantities within the game world rather than being minted or printed by a bank or government. Despite the fluid nature of this currency, it is seemingly immune to basic economic forces like inflation, supply and demand, devaluation, and Gresham's Law.

The primary Global Currency Exception is when the designers will insert a region where it isn't accepted in an to add difficulty to the later parts of the game.

This is an Acceptable Break From Reality—imagine how taxing it would be to spend time in video games changing from currency to currency. It can be justified by an Energy Economy, or coins minted out of valuable metal.

Examples of Global Currency include:

Retrieved from "https://allthetropes.org/w/index.php?title=Global_Currency&oldid=1795998"
Categories:
Cookies help us deliver our services. By using our services, you agree to our use of cookies.