Zelda II: The Adventure of Link 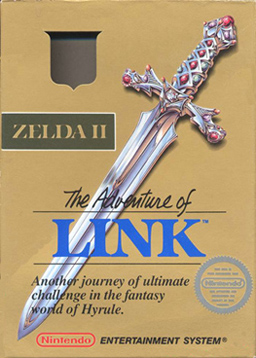 Radically different from both its predecessor and every game in The Legend of Zelda series since, Zelda II: The Adventure of Link featured an overhead-view map like the first game, but introduced side-scrolling action sequences and RPG Elements such as level ups, magic and health points, and random encounters, as well as more complex world and story elements, including towns filled with characters. It was somewhat divisive and did not attain quite the same popularity as the rest of the series. Still, the game definitely left its mark on the franchise: while later games would return to the top-down action-adventure model of the original rather than being more like an RPG, the magic meter, and especially towns filled with NPCs and sidequests would become staples of the series.

The story basically has two threads. On the one hand Link, after his defeat of Ganon in the original game, is attempting to collect the third piece of the Triforce: the Triforce of Courage. Doing this will help wake the sleeping Princess Zelda (not the same one from the original) from her long magical sleep. On the other hand, Ganon's followers are trying to resurrect Ganon, and the only way to do that is with the Hero's blood. Thus, there's lots of enemies standing in Link's way as he attempts to deposit six crystals in the six palaces throughout Hyrule and open the path to the Great Palace, where the Triforce of Courage is kept...

Reviewed by The Angry Video Game Nerd here. The review was done on request, and mostly just highlights how insanely Nintendo Hard the game is. Despite that, the Caustic Critic likes it and was surprised when the requester called it a bad game, and he had spoken favourably of it in previous episodes.

Even if The Black Cauldron and Legend didn't influence the first game, they certainly did with this one.

According to Hyrule Historia, this is the last game in the "Link died during Ocarina of Time" timeline.

Tropes used in Zelda II: The Adventure of Link include:
Retrieved from "https://allthetropes.org/w/index.php?title=Zelda_II:_The_Adventure_of_Link&oldid=1730476"
Categories:
Cookies help us deliver our services. By using our services, you agree to our use of cookies.