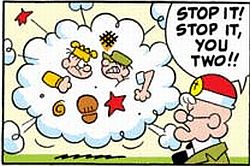 When fighting, two (or more) animated or comic strip characters may vanish into a ball of smoke, from which the sounds of a really violent struggle emanate.

Hands, feet, or other random objects may protrude momentarily, then be pulled back in.

This is used to indicate that the fight is so violent that:

During a really long fight, the Big Ball of Violence may start rolling around the area, sucking up any nearby bystanders or objects into the fight (not unlike other big stickyballs) -- one of which is usually That Poor Cat.

Sometimes a character escapes from the Big Ball of Violence, leaving the other participant to realize he's been beating up himself (or, if several characters had ganged up on the escapee, each other).

When the smoke clears, someone is liable to be sporting Amusing Injuries.

Take Our Word for It that Battle Discretion Shot serves a similar function.

Examples of Big Ball of Violence include: