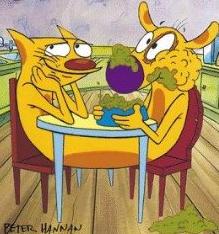 "Twice the pet and none of the mess!"

CatDog was an animated series that first aired on Nickelodeon in 1998 and ran for three seasons.

The story revolved around CatDog, two conjoined twins who were a cat and a dog respectively. Cat was the sophisticated one, being into things such as the Opera and cleanliness. Dog, on the other hand, is much more laid back than his brother and enjoyed going on adventures and eating. The episodes revolved around Cat and Dog's daily adventures of living with each other and trying to avoid harassment from a gang of three dogs named the Greaser Dogs and their neighbor (who lives in one of the walls of their home) Winslow, a blue mouse.

Tropes used in CatDog include:

Retrieved from "https://allthetropes.org/w/index.php?title=CatDog&oldid=1579930"
Categories:
Cookies help us deliver our services. By using our services, you agree to our use of cookies.