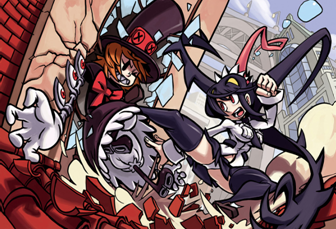 Developed by Reverge Labs and published by Autumn Games and Konami, the frenetic 2D Fighting Game Skullgirls puts players in control of an all-female cast (much like Arcana Heart). Instead of banking on the "moe" aesthetic and anime designs, the game uses a more stylized "Golden Age" Hollywood film motif, employing Art Deco ("Dark Deco", as the designers lovingly call it) stage backgrounds and a theatrical, movie-studio presentation. Skullgirls features work from an all-star development crew: fighting game veteran Mike "Mike Z" Zaimont led the project, Cristina Valenzuela directed the voice acting, Alex Ahad (whose prior work credits include Lava Punch, UDON’s Tribute books, and Scott Pilgrim) created artwork for the game, and Michiru Yamane provided the music. Both the Playstation Network and Xbox Live Arcade carry the game in the US, Europe, and Australia; the developers also have plans for a PC release later in 2012. Japan will receive a stand-alone disc release of the game after the developers finish work on the DLC characters (as Japan harbors a general distaste for DLC).

In the Canopy Kingdom, female combatants fight in an attempt to control the enigmatic Skull Heart, a mysterious MacGuffin with the power to bestow wishes -- but not without a substantial price. Should the victor possess an impure soul, both her wish and her physical body will be corrupted into a living nightmare that haunts humanity: the monstrous entity known only as the Skullgirl. In the middle of a war with two other nations, the Canopy Kingdom's queen won the Skull Heart and wished for peace. In a way, she got her wish: after she transformed into the most powerful and dangerous Skullgirl of all time, all three countries agreed to stop fighting each other in order to save themselves from the Skullgirl. When the game's story begins, the now-ended war remains fresh in everyone's minds, and rumors say a new Skullgirl has risen…

Skullgirls' gameplay carries the feel of old-school arcade fighters while providing a high-definition twist. It features a "ratio system" that allows each player to choose to fight with one character or a team of up to three characters, resulting in different combinations for a particular match. The game also features a special combo detection system: if a player begins an infinite combo, the damage strikes change color, and the game will allow the opponent to "burst" out of the infinite and knock the offensive player away.

The cast of characters includes Filia, Cerebella, Peacock, Parasoul, Ms. Fortune, Painwheel, Valentine, and Double. Check the Character sheet for more information on all of them. Two DLC characters, Squigly and Umbrella, are already known to be in development, however Reverge has stated that any named character has a chance of being turned into DLC.

Alex Ahad: The personality is kind of my own thing -- I like making things that are ridiculous and over-the-top, but are also serious and tinged with a dark sense of humor. And a lot of my characters are cute, but I always end up putting something off-putting or violent about them.