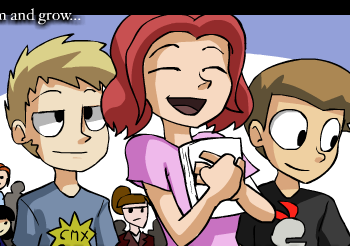 The Power Trio. Not pictured: Loads and Loads of Characters.

So, this one time at band camp... a teenage girl found a magic flute that revealed to her that she is The Wotch, an extraordinarily powerful magical girl who appears once in each generation. Her magic is discovered by two boys shortly after she transfers to Tandy Gardens High School, and the three wrestle with magical emergency after magical emergency, brought on by a shadowy Big Bad figure. Hilarity Ensues... and "no gender is safe".

A Web Comic with a Mundane Fantastic theme, varyingly zany adventures with an overarching Myth Arc, and almost every possible variety of Shapeshifting oozing out of its suddenly feminine ears. The art goes from poor to unspectacular-but-fitting. The Wotch has a sense of fun and does some good romps if you can get into it and like, or don't mind, the levels of things turning into other things.

Spawned a number of spinoffs, the most notable being The Wotch: Cheer!, about a group of jocks turned into cheerleaders. Cheer! now has its own page so please post all Cheer! related examples there.

Tropes used in The Wotch include:
Retrieved from "https://allthetropes.org/w/index.php?title=The_Wotch&oldid=1811561"
Categories:
Cookies help us deliver our services. By using our services, you agree to our use of cookies.