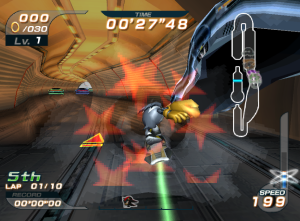 Whoever is in that hover-car is having a very bad day.[1]

"Yeah, take that flowers. And you too, patch of dirt."
—Yahtzee reviewing Minecraft

In opposition to the traditional practice of setting games in spartan worlds with nothing about that doesn't want to kill you, recent games try to add realism by inserting a lot of prop objects, such as chairs, tables, televisions and the like. These will frequently end up in your way.

There being only so many buttons on the game controller, the user interface is rarely set up to allow any kind of sophisticated interaction with these props, so the usual way of dealing with such things is to blast them to pieces. Quite often, the game will actively reward you for this with various forms of in-game currency.

As the inclusion of Ragdoll Physics becomes commonplace, expect this to increase, as objects can suddenly become extremely useful as weapons. If destructible objects are useful only to show off how awesome the physics engine is, then you've discovered an example of Wreaking Havok.

Crate Expectations is this as applied to the most commonplace prop. Kung Shui is a close relative that this trope often wishes to emulate. Not to be confused with Destroyable Items, which is a game mechanic which allows you to accidentally destroy things you'd rather not have destroyed.

Examples of Die, Chair, Die! include: