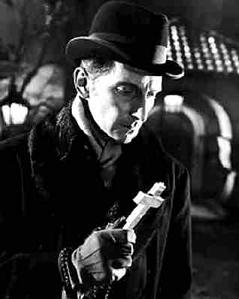 The prey of The Hunter tend to be criminals or supernatural monsters. Whether The Hunter is a good guy depends on the alignment of said prey, although almost all Hunters have to wrestle with fanaticism. If they fail to control that fanaticism, they'll eventually discover what happens to He Who Fights Monsters.

The most common kind nowadays is the Vampire Hunter, though Demon Slayers and Vigilante Men who target criminals are also common. The Witch Hunter is the least sympathetic variety.

The Hunter's motivation is usually one of the following:

Occasionally parallels Bounty Hunter, although for The Hunter, this is always very personal. (They don't always mind taking money for the endeavor, though. After all, equipment is expensive.)

A Hunter with no fixed home is probably also a Knight Errant. Depending on the Hunter, may end up committing Van Helsing Hate Crimes. Not to be confused with a zombie using the same name. See also Mary Sue Hunter for the sue killing type.

For actual animal hunters, see Egomaniac Hunter, who hunts for the hell of it, Evil Poacher (who hunts endangered animals), and Great White Hunter (the Victorian ideal of hunter-as-Gentleman Adventurer). Any of these tropes may overlap with this one, however.

Examples of The Hunter include:

Retrieved from "https://allthetropes.org/w/index.php?title=The_Hunter&oldid=1957511"
Categories:
Cookies help us deliver our services. By using our services, you agree to our use of cookies.