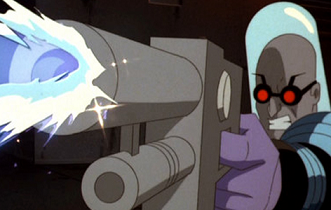 He won't be screaming long... but that's a very cold comfort.

The mechanism varies from gun to gun. Some freeze rays operate by spraying a target with a sheet of ice or snow, like an icy version of a flamethrower. Some spray a stream of liquid, e.g. liquid nitrogen. Most commonly though, freeze rays fire blasts of coldness as Frickin' Laser Beams to freeze the target. Note that coldness doesn't quite work that way; coldness isn't energy, but rather lack of it (from the point of view of our environment's parameters). As such, you can't transfer coldness; you make things cold by transferring heat away from them. But, it isn't really worth getting into heated debates over the mechanics of the Freeze Ray. So what if it's another example of writers giving Conservation of Energy the cold shoulder? They've been getting along just fine over the years thanks in part to the Rule of Cool Cool.

Real world physics experiments which require extreme cold near absolute zero use lasers to perform 'atom trapping', slowly punting the target with photons to stop it bouncing around uncontrollably. If your target isn't a blob of already-supercold gas comprising a few dozen atoms though, you'll find this technique less than useful.

Frequently toted by An Ice Person, dressed in An Ice Suit, in order to Kill It with Ice. Ice.

Does anyone else feel cold?

Examples of Freeze Ray include:

Retrieved from "https://allthetropes.org/w/index.php?title=Freeze_Ray&oldid=1801787"
Categories:
Cookies help us deliver our services. By using our services, you agree to our use of cookies.