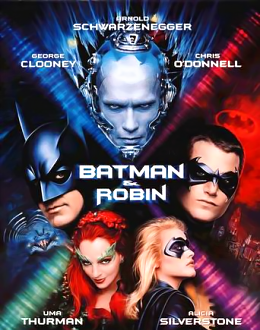 Notice the subtleties in the neon lighting, and the daring colours Schumacher has put on to offer.

Batman & Robin is the film which put Batman on ice, metaphorically and literally.

After the box-office success of 1995's Batman Forever, a sequel was inevitable. Audiences which gave Batman Returns the cold shoulder for its darker tone eventually warmed up to Forever for its Lighter and Softer take on the Batman mythos. What did Warner Bros do for this sequel? It secured an All-Star Cast, turned the Camp Up to Eleven, and threw a $125 million budget behind the film's production. They also rushed the production schedule and put most of the emphasis on toy-friendly promotional tie-ins. What came out of this situation is a film many people love to hate to this very day.

The film is not to be confused with Batman and Robin -- the sequel to the first Batman film ever made (The Batman) -- or the Grant Morrison comic series of the same title, or the Frank Miller series All Star Batman and Robin

Tropes used in Batman and Robin (film) include:
Retrieved from "https://allthetropes.org/w/index.php?title=Batman_and_Robin_(film)&oldid=1911955"
Categories:
Cookies help us deliver our services. By using our services, you agree to our use of cookies.