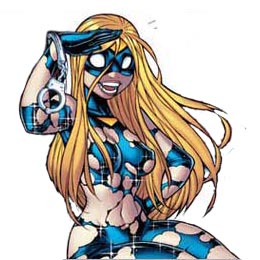 Empowered is a graphic novel series written and drawn by Adam Warren; its chief protagonist is the eponymous Empowered, a Damsel in Distress-prone heroine. Empowered contains numerous deconstructions of Superhero comics alongside healthy doses of bondage, Fan Service, and comedy.

Empowered is a plucky D-List Superheroine who means well, even though she's generally hopeless when facing down villains. No matter how much she prepares or trains, she's inevitably betrayed by the fragile source of her superpowers: her outrageously skin-tight super-costume (which Emp is less than happy about, as she has numerous body-image issues). Emp's suit gives her immense power only while it's fully intact -- and since it's made from a material that tears easily and can't be worn with anything over or under it, Emp is seldom in a position to benefit from it for long. She spends most of her time being tied up by supervillains -- a fact which has made her a laughing stock amongst her peers -- and either naked or near-naked. Emp's confidence gets shredded as frequently as her fragile super-suit -- and yet, she persists.

Tropes used in Empowered include:
Retrieved from "https://allthetropes.org/w/index.php?title=Empowered&oldid=1930335"
Categories:
Cookies help us deliver our services. By using our services, you agree to our use of cookies.