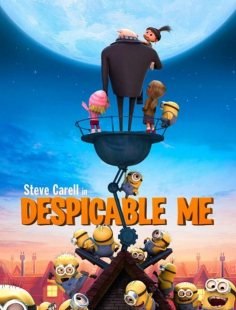 The first animated film from Illumination Entertainment, under Universal Pictures, and executive produced by Christopher Meledandri, the former head of Blue Sky. The plot revolves around a Super Villain named Gru (Steve Carell) plotting to steal the moon while he hides underground in a suburban neighborhood.

Unfortunately, a younger villain, Vector (Jason Segel), steals the shrink ray Gru was in the middle of stealing, and he needs to get it back. That's when Gru notices how willing Vector is to let orphans selling cookies into his house and ...lightbulb! Gru proceeds to adopt the three orphans: Margo, Edith, and Agnes (Miranda Cosgrove, Dana Gaier and Elsie Fisher) to carry out his Evil Plan

Can Gru learn the importance of family and how to be a good dad?

A sequel, predictably named Despicable Me 2, was released in 2013, followed by Despicable Me 3 in 2017. In 2016, Gru's yellow minions got their own movie, which was a Prequel of sorts to the first film.

Tropes used in Despicable Me include:

Retrieved from "https://allthetropes.org/w/index.php?title=Despicable_Me&oldid=1870441"
Categories:
Cookies help us deliver our services. By using our services, you agree to our use of cookies.