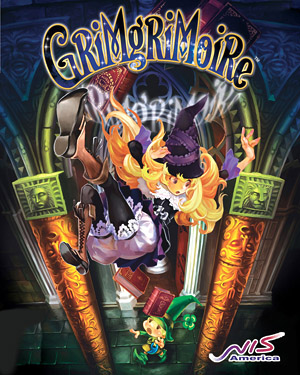 Grim Grimoire is a real-time strategy game brought to you by Vanillaware and Nippon Ichi.

It tells the tale of a magically-gifted child called Lillet Blan, who gains admission to a renowned Wizarding School called the Tower of Silver Star. There she meets an eclectic ensemble of students and teachers- the mysterious and bearded old headmaster, the sarcastic and Obviously Evil Sorcery teacher, and the cold but perceptive honor student, to name a few- and learns about the four schools of Glamour, Necromancy, Sorcery and Alchemy.

Everything is going swimmingly until the fifth day, when Lillet awakens to find that everyone is dead and that a sinister evil has been unleashed from within the school. Lillet is soon killed as well, but suddenly finds herself in a Groundhog Day Loop, thrust back to her very first day in school but retaining all the knowledge she learned in the meantime.

After taking the sensible approach of alerting her teachers, only for it to result in spectacular failure, Lillet realizes that her only chance of averting her fate and escaping the time loop is to do it all herself. Along the way, she'll delve into the history of the school and discover dark secrets about practically every member of the facility, including herself.

Grim Grimoire wears its inspirations on its sleeve, and none the worse for it. Though the plot has been described as weak, the characters more than make up for it, with a whole school full of freaks and lunatics barely capable of organizing their own twisted love lives, let alone a workable school.

Tropes used in Grim Grimoire include:

Surely: Miss... surely you don't expect to make it out alive, do you?
Lillet: Of course I do, and don't call me Shirley.