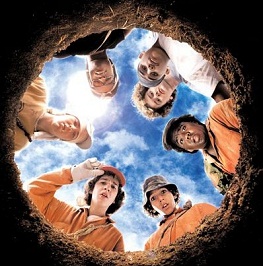 Holes is an extremely well-regarded children's novel by Louis Sachar (Wayside School). It's about teenager Stanley Yelnats, who is arrested for a crime he didn't commit and sent to a juvenile detention center called "Camp Green Lake". At the camp, the boys are mistreated by the suspicious owners, who force them to continually dig holes in the middle of a desert. And there are curses. And thumbs. And a story from the past about a romance destroyed by bigotry.

Not so depressing or angsty as the premise makes it seem, but still a bit "adult" for a kids' book, hence its success. The narrative includes two other timelines in addition to Stanley's that appear to be almost irrelevant to each other, until the resolution when they all come together.

In 2003, it was made into a fairly faithful film by Walt Disney Pictures, the script also written by Sachar. It was directed by Andrew Davis (of The Fugitive fame) and stars Shia LaBeouf as Stanley, Sigourney Weaver as the Warden, Jon Voight as Mr. Sir and a good deal of other notable actors in bit parts.

Sachar also wrote a sequel called Small Steps, which follows Theodore ("Armpit") and X-Ray after their release from Camp Green Lake. Two years later, he is trying to finish passing high school, earn some money, and get his life back on track. X-Ray, however, plans a get-rich-quick scheme with him by scalping tickets. Those tickets, however, are for the concert of Kaira De Leon, a troubled teen pop singer. Their lives intersect in unexpected ways.

Tropes used in Holes include: