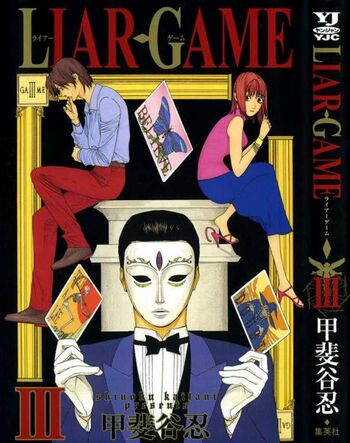 Liar Game: It's a game where you lie.

Written by Shinobu Kaitani (also the author of One Outs), Liar Game is a manga and drama series about the struggles of Nao Kanzaki against a mysterious and nefarious organization called the Liar Game Tournament Office that places innocent people through psychological games using their debt as bait. All its members wear masks and any participants of the game are free to drop out, assuming they pay their debt which the game forced upon them. With debt that frequently is in the 100 million yen range and quite often more, it's no small deal. Said organization will also collect the debt "any way possible..."

Using the help of recently released conman/genius/ChessMaster Shinichi Akiyama, Nao seeks to rid herself of debt and also save those who are participating in the games. Expect all all kinds of plans and cunning to apply here, as it is a Battle Royale of wits.

This story has a prequel called Liar Game-Roots Of A, which has a one-shot chapter that deals with the backstory of Akiyama and contains several other unrelated one-shots.

Here is a wiki for more information. If you wanted to join a game like, check out an example that finished here [dead link] or join something similar here.

Tropes used in Liar Game include:
Retrieved from "https://allthetropes.org/w/index.php?title=Liar_Game&oldid=1884701"
Categories:
Cookies help us deliver our services. By using our services, you agree to our use of cookies.