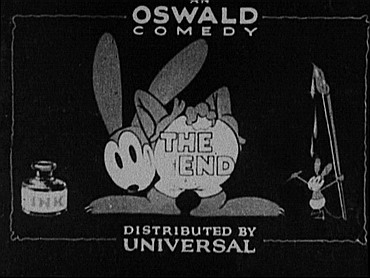 Well, we never said that he was the modest rabbit...

As we all know in animation, when it comes to Disney's cartoon characters, we must remember that it all started with a... rabbit?

The original cartoon star of animation duo Walt Disney and his longtime friend and partner Ub Iwerks, Oswald the Lucky Rabbit was once an all-but-forgotten, but very important, character in the History of Animation. Despite how obscure he has remained up 'till recent years, his presence would wind up having a large impact on the future of the cartoon industry as a whole, laying the groundwork and paving the way for Walt Disney's future projects which would change animation forever.

In the waning years of the Silent Age, Walt Disney was — for lack of a better term — a nobody. Twice, he had attempted to enter the field of animation, and both efforts had led to dead ends: first, Walt's doomed Laugh-O-Grams studio; then, the slightly more successful live action/animation-blending Alice Comedies series. Finally, distributor Winkler Pictures got Walt and Ub a contract with Universal Studios. Walt, Ub, and their staff put together a pilot starring Oswald, called Poor Papa. Though Papa didn't impress Universal's management, a series of Oswald short comedies were still given the greenlight, and the Disney staff got right to work, with Oswald's official debut coming in the short Trolley Troubles (1927).

Still inspired by his viewings of Charlie Chaplin films, Winsor McCay's "Gertie the Dinosaur", as well as Otto Messmer's Felix the Cat and Paul Terry's "Aesop's Fables" and Max Fleischer's Out of the Inkwell, Walt began striving for higher-quality animation and more dynamic use of rubber-hose animation, as well as much heavier emphasis on personality, story-based gags, and much more attention to story -- this made the series a huge advancement over Walt's earlier Alice Comedies.

Thanks to these added touches, the Oswald cartoons quickly became a hit series with the public, although he never reached the popularity of Felix the Cat or Koko the Clown. Oswald was even the first Disney cartoon character to receive his own tie-in merchandise (e.g., candy, stuffed animals, and pinback buttons)! Walt finally had a hit cartoon star, and it seemed like nothing could go wrong...

But alas, his success with Oswald was not to last. In 1928, Disney got into a hassle with Charles Mintz, then de facto boss of Winkler Pictures. When Disney confronted Mintz to ask for a budget increase (so that he could continue improving his animation standards), he was told not only that he would receive no budget increase, but that he had to accept a 20% budget decrease. As if things weren't bad enough, Mintz informed Walt that he had hired away most of Walt's animation staff under a new contract -— and in the biggest blow of all, he reminded Walt that he technically did not own the character or trademark rights to Oswald. (In fact, it has been said that Charles Mintz actually chose the name for Oswald out of a hat.) So Mintz gave Disney an ultimatum: take the budget cut and loss of staff control, or lose the right to use Oswald altogether.

We all know how this turned out, folks. After completing the remaining Oswald cartoons they were contracted to make, Walt, Ub, and their two apprentice animators who stuck with them, Les Clark and Wilfred Jackson, left Winkler and Universal altogether. Walt, very hurt by the ordeal, learned from there on out to be his own boss, and to always make sure that he owned the full rights to every character he owned.

That, and this ordeal led him and Ub to create their own Captain Ersatz for Oswald when they started Walt Disney Productions: Mickey Mouse.

Meanwhile, back at Universal, Charles Mintz got a second season of cartoons made starring Oswald...but was soon handed over to Walter Lantz, a former Winkler director who would now open a studio of his own, after he won the rights to Oswald in a poker game. Over the next few years, Oswald continued to star in moderately successful cartoons, at least prior to the mid-30's. Lantz, with the help of industry veteran Bill Nolan and young staffers like Tex Avery (who would occasionally direct a few shorts in Nolan's steed), took the Oswald series into a more cartoony, fantasy driven direction than what Walt had done with him, distinguishing Oswald from being merely Disney's take on Felix the Cat. The animation became much more loose and organic than Disney's product due to Nolan's fast speed, a compensation for Lantz's low budgets on the series, and the strong narratives and personality were dropped in favor of improvised, freewheeling musical-oriented fests, with plenty of off the wall animation to boot. Oddly, Oswald had no regular voice actor in the Lantz era (apart from a period of about a year-and-a-half early on, when Pinto Colvig regularly served as his voice), and studio staff would just take turns voicing him.

Unfortunately, by the mid-30's, The character's popularity began to decline; appearances in color, as well as a few redesigns (at first making him more kid-like, then much more like a realistic rabbit) did little to halt the slide. Lantz began launching other short subject series in an attempt to replace the Oswald series, almost none of which were successful. By 1938, Oswald's popularity had dwindled enough to where Lantz decided to put the series on hiatus.

In 1943, Lantz attempted to resusicate the Oswald series via one short, "The Egg-Cracker Suite"--only to find a cartoon industry that the cutesy hare was completely unsuited to--by this point in time, Disney parodies and fast paced comedies, as well as Screwy Squirrel characters, were all the rage--including Lantz's own new star, Woody Woodpecker. As such, the now-domesticated Oswald was given the shaft as a series star altogether, after lasting an impressive 192 short subjects. His last cartoon appearance would be a cameo along with Andy Panda —- Universal's second major cartoon star —- in the 1951 short The Woody Woodpecker Polka. And aside from comic appearances, occasional TV reruns, the occasional history book mention, and two cameos in Christmas in Tattertown, the character fell into total obscurity, doomed to be a forgotten relic in animation history...

Or at least, that was how it seemed -- until 2006, when things finally got better; In exchange for trading a sportscaster to NBC Universal [1], Disney acquired all of the rights to Oswald and his shorts (excluding the post-Disney Universal cartoons), and in 2007, they reintroduced the world to the character via a two-disc DVD collection called Walt Disney Treasures: The Adventures of Oswald the Lucky Rabbit. A handful of the Lantz Oswalds were also included on the two Woody Woodpecker DVD sets released around the same time.

As if things weren't good enough already for the old bunny, he made his full comeback, as the older half-brother of Mickey, in the 2010 video game Epic Mickey.

Note: Belonging to Universal from the start (with Walt being unaware of this until the ink hit the fan, so to speak), Oswald, by pure technicality, is not part of the Classic Disney Shorts lineup and was technically not even a real Disney character until 2006, despite laying the groundwork for Walt and Ub's later work. It is argumentative if Oswald was really the first Disney animated hero because on one hand Disney and Iwerks did create the character, but on the other hand, Disney never had ownership of Oswald to begin with.

Obviously, no relation to My Uncle Oswald.

Contrast Felix the Cat and Bosko the Talk Ink Kid.

Noteworthy Oswald the Lucky Rabbit Shorts:
Tropes Related to Disney-Made Oswald Shorts and Character:
Tropes Related to Post-Disney Oswald Shorts Made by Winkler and Lantz:
Retrieved from "https://allthetropes.org/w/index.php?title=Oswald_the_Lucky_Rabbit&oldid=1963178"
Categories:
Cookies help us deliver our services. By using our services, you agree to our use of cookies.