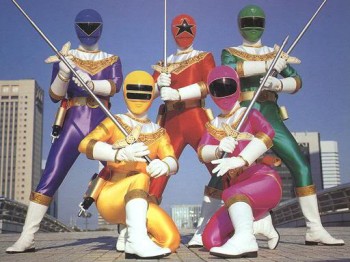 The fourth season of Power Rangers; a follow up to Mighty Morphin Power Rangers, adapted from Chouriki Sentai Ohranger. Rita and Zedd have been reduced to homeless rovers on what was once their moon kingdom due to the invading Machine Empire, who want to gut Earth of its natural resources. The Rangers are briefly left powerless after the destruction of their command center. But thankfully, Zordon reveals that he and Alpha have tapped into the mighty Zeo Crystal and they have produced brand new ranger powers, including for the first time brand spankin' new uniforms for the entire team.

Zeo is largely where the franchise began to grow up, by introducing a few season-spanning plot threads, becoming slightly less preachy (with charity work a less common plot element) and much more character-driven. Newer characters such as Katherine and Tanya, and even Rocky and Adam, were allowed to grow beyond their Suspiciously Similar Substitute beginnings. Even Bulk and Skull managed some Character Development after going through police training and later becoming private detectives. The show also reintroduced Jason, the original Red Ranger, to return and take up the role of their Sixth Ranger.

Zedd and Rita were also not quite out of the picture, as they worked to reclaim their status as the series villains and sometimes their guerrilla strikes against the Machine Empire ended up helping the Rangers. It is one of the more popular seasons, as it had classic characters, an epic scope and decent writing. It also set up the concept of the Ranger changing powers and costumes once a year. It's still not without its problems. One of the biggest criticisms is that it doesn't really have any conclusive ending; the series ends with Jason giving up the Gold Ranger powers and the Machine Empire crippled (but not entirely destroyed) with Lord Zedd declaring "We're back!" and plotting their full return. It goes on straight to the Turbo movie, where Lord Zedd and Rita are nowhere to be found and the Zeo powers are suddenly useless (we do get one funny scene in the Turbo movie where Divatox calls up Rita for advice on how to defeat the Rangers).

The infamous fan hoax Scorpion Rain was an attempt to bridge this gap, which was then retroactively placed into continuity years later, by being the setup for the events in the ten-year anniversary episode "Forever Red". Basically the story involved Rita and Zedd fighting against the Machine Empire including Zedd's Zord Serpentera, and climaxing with a royal rumble on the moon. Several Fanedits have been made of this "episode", all of which can be found on Youtube.

The official Word of God (given years later) says that Rita and Zedd had taken off for a belated honeymoon and Rita's ensuing maternity leave... But other than the child appearing years later from out of nowhere, there was no in-series hint of why they suddenly disappeared after this season. Though since the season ended rather coherently much of this can be blamed on Power Rangers Turbo for its lack of series continuity.

But don't kid yourself: this season is well known for the infamous "Dear John" Letter that Kimberly sent to Tommy.

Retrieved from "https://allthetropes.org/w/index.php?title=Power_Rangers_Zeo&oldid=1725314"
Categories:
Cookies help us deliver our services. By using our services, you agree to our use of cookies.