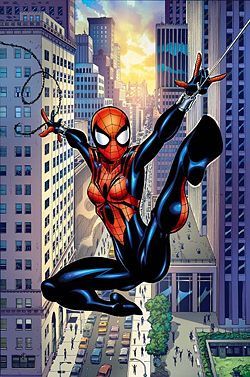 What if Peter Parker and Mary Jane's baby had survived The Clone Saga? In an Alternate Timeline, the baby was rescued and returned to Mary Jane and Peter alive and well, shortly after Peter Parker retired as Spider-Man when he lost one of his legs in a fight which killed the Green Goblin. The baby grew up to become May Parker--Mayday to her friends (and to help us differentiate between her and her namesake Great Aunt). The character was introduced in What If vol. 2 #105 (February, 1998), created by Tom DeFalco and Ron Frenz. Her costume was created by Mark Bagley.

At fifteen, May is a popular, pretty, athletic girl. She's inherited many things from her parents, like her mother's social ease, her father's smarts....and, whoops, his Spider-powers. They manifest quite suddenly during a school basketball game, where - luckily - her parents are the only ones in the crowd who realise what's going on. She's at most about half as strong as her Dad, but much more agile, and her Spider Sense is apparently better. In an interesting twist on wall crawling, May can also stick other people to walls, or repel them with equal ease.

Needless to say, her parents have mixed reactions to all this. Nevertheless, May finds Ben Reilly's old Scarlet Spider costume in the attic and decides to put it on after a new Green Goblin appears (Normie Osborn, (grand)son of the originals) to menace her father, who isn't in fighting shape. Unable to secure help from other heroes, Peter reluctantly authorises May's one-time-only appearance as Spider-Girl. Of course, she ends up enjoying the experience so much (and has had the "With great power, comes great responsibility" meme drilled into her so thoroughly) that she feels compelled to become Spider-Girl on a more permanent basis.

This series sometimes plays with the I Just Want to Be Normal trope in the way Spider-Man does, but to a lesser degree. May genuinely wants to be a superhero but angsts when it brings her into conflict with her parents, or when she messes up, or when she feels she isn't as good as she'd like to be. There are also times when she gives it up, or loses her powers temporarily... but still misses the thrill of superheroics, and lets her sense of responsibility push her back to them.

Was Marvel's longest-running comic starring a solo heroine through 102 issues (including #0 and the annual) of Spider-Girl, a relaunch/renumbering as Amazing Spider-Girl, and a further 31 issues (they just love their #0 issues in MC2!) before final cancellation. She-Hulk might have reached #100 first, but Spider-Girl did so without ever being cancelled. Currently running as a digital comic that goes to print after a couple months' delay in the anthology title Web of Spider-Man. A recent announcement was revealed that it would be getting a new, proper monthly series again, until it was later switched into a mini series and a The End one shot to wrap up the series and presumably the MarvelComics2[1].

If you're looking for the Earth 616 Spider-Girl (Anya Corazon), search her in the Spider-Man Character Page. If you're interested in The Verse, check Marvel Comics 2.

Tropes used in Spider-Girl include:
]
Retrieved from "https://allthetropes.org/w/index.php?title=Spider-Girl&oldid=1846512"
Categories:
Cookies help us deliver our services. By using our services, you agree to our use of cookies.