Everything About Fiction You Never Wanted to Know.
< Super Robot Wars J
Jump to navigation Jump to search 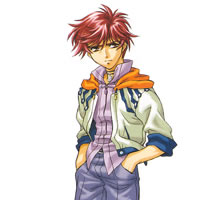 One of the main characters of SRW Judgement, Touya Shun is just your ordinary everyday 17 year-old Japanese high school student and good friends with Kaname Chidori. Obviously, this normalcy isn't going to last, and a giant robot (of your choice) crashes into his school one day (with 3 hot chicks in it, too!!)

As you play through the game, you find out some things: his father's a Knight to the Fury moon race that's trying to kill us all and had him with his recently deceased Earthling mother (and if you're wondering his dad's dead too); he's apparently childhood friends with the Princess of the Fury that's trying to kill us all, just that he can't remember it; and The Dragon is his father's star pupil. He eventually grows a pair of balls, gets over his cowardice and kicks ass. 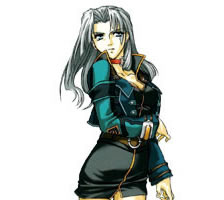 The other main character of Judgment, complete with a separate story. Calvina was once a genius Ace Pilot, but she ends up retiring and being called to a facility to tutor people there about mecha-riding. As fate would have it, the Fury wipes out the facility and all the data within, and she's the Sole Survivor; not even her boyfriend survives. Heartbroken, Calvina changes from a usually enthusiastic lady into a sad woman, sometimes putting up Wangst. She's later drafted again to the battleship Nadesico, again as a tutor/adviser, because she has nothing else to do, until during the voyage she meets up with 3 hot girls carrying a mecha (of your choice) and BEGGED HER to ride it and defend the ship. After much doubts, since she spent lots of years NOT piloting, she finally gets to kick some ass.

Though her days of ass-kicking is suddenly interrupted when the Fury shows up again. To her horror, The Dragon is her boyfriend, Not Quite Dead, and his own Dragon is also her old pupil, also Not Quite Dead. What's worse, they were the conspirators of the facility's destruction. Filled with doubts, anger and sadness, Calvina starts hating the Fury and swears vengeance...and continues to kick ass, with much dose of violence and hatred added. But in the end, even she realizes she still loved her boyfriend, despite the atrocities...

She can pilot all the mecha Touya can. What she lacks in bloodline inheritance bonuses, she makes it up with her sheer skill being an Ace Pilot in the past. Tropes about Calvina: 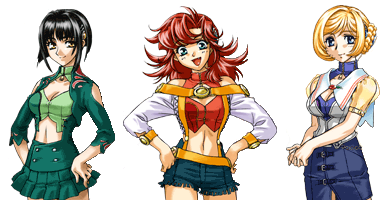 These 3 girls help the protagonist (either Touya or Calvina). They were experimented by the Fury, but managed to escape thanks to Touya's father, along with one Fury mecha (of your choice). Katia seems to be the leader, the calm and composed one (her assistance gives boost to hitting and dodging), while Festenia is the feisty one and often curses (boosts total damage output) and finally Melua is the shy, timid one, most prone to tears (gives defense skills). They help the heroes navigate through their mecha and ends up ultimately helping them win the day.

If the player is Touya, it's possible he ends up getting a relationship with one of them, but not an option for Calvina, because she's already devoted to her old boyfriend (so much for a Gay Option). Tropes associated with these girls, as well as the mechas they bring:

The main enemy of Super Robot Wars Judgment. Said to be the ones who seeded life on Earth, and now they reside in the moon, watching over the Earth. With all the wars going on, you know what's going to happen. They also claim to be defeated by another force and fled to the far ends of the universe. Led by Gu-Landon Goetz and his Dragons Al-Van Lunks, Calvina's boyfriend, who was taught by the rebellious father of Touya, El-Selda Shun, Fu-Lu-Mu-Lu and Jua-Mu Dalbi. Tropes associated with the Fury:

Back to Super Robot Wars J

Retrieved from "https://allthetropes.org/w/index.php?title=Super_Robot_Wars_J/Characters&oldid=1845704"
Categories:
Hidden category:
Cookies help us deliver our services. By using our services, you agree to our use of cookies.