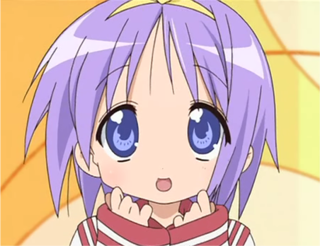 A style in Anime and Manga of drawing eyes where they droop or sag. It is the usual way you'll see eyes on a Moe character. It generally represents a kind, quiet or otherwise soft person. Only really notable if there are more than a handful of characters that are drawn without them.

This does not, however, mean that Tareme Eyes are Always Lawful Good Eyes. In real life, eyes visually take a downward droop when someone is looking down on you, and looking calm in a tense situation is an affirmatively Badass trait.

Note that the "me" in "tareme" actually means "eyes" in Japanese. We just enjoy being redundant.

Its opposite is Tsurime Eyes. This trope originated in Japan (thus the name), the trope has made its way into western works due to cultural diffusion and Animesque drawing.

Examples of Tareme Eyes include:

• Sucy, the snarky, sickly-looking heroine of Little Witch Academia has rather droopy eyes, whose lids are more often that not lowered, giving her a rather unamused look most the time.