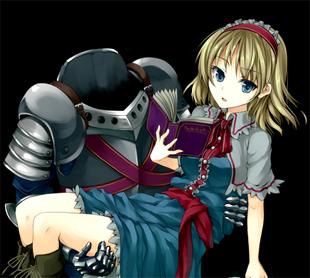 So the armor itself can save maidens too?[1]

A character is attacked by a heavily armored knight.

Upon defeat, however, it is revealed that there is nothing inside. The empty armor may fall to the ground with a great clatter. Was it a ghost? Animation by something unseen? A case of No Body Left Behind? You may never know.

This trope frequently involves rigid armor, such as a suit of platemail.

In Science Fiction settings, a similar effect may be achieved by using Powered Armor in unmanned mode (programmed or remote).

Examples of Animated Armor include:

Retrieved from "https://allthetropes.org/w/index.php?title=Animated_Armor&oldid=1845532"
Categories:
Cookies help us deliver our services. By using our services, you agree to our use of cookies.