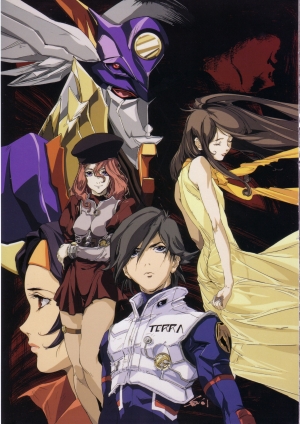 It's 2015, and Ordinary High School Student Ayato Kamina lives in a sharply delimited world. Three years earlier, something happened that enclosed Tokyo in an impenetrable shell. As far as Ayato and the other inhabitants of the city are concerned, the rest of the world simply vanished, and they are all that is left. His painting, and getting by day-to-day while his widowed mother spends all her time on her secret job for the government are more important to him. At least, until mysterious invaders pass through the barrier and attack Tokyo with advanced fighters while strange, sculpture-like war machines protect the city.

In the midst of that attack, two women enter his life. The first, Haruka Shitow, claims to be there to "rescue" him and take him out of walled-in Tokyo. The second is Reika Mishima, a strange girl who looks like she just stepped out of the most recent painting Ayato has been working on. Reika approaches the boy and sets him on his way to discovering RahXephon, a giant robot as sculptural as the weapons defending the skies above, encased in a giant "egg" deep below the city. But when Ayato awakens and bonds with RahXephon, his life will never be the same again.

Based on the 1970s mecha show Brave Raideen and heavily inspired by science fiction literature (The Dandelion Girl), most Western audiences will compare it to Neon Genesis Evangelion. Where Evangelion is about dysfunction and despair cloaked in Kaballah and Judeo-Christian religion, RahXephon is about transcendence and revelation, blending musical imagery and Mayan lore to produce a result that is thematically the total opposite to the bleakness of Evangelion's climax. Despite the two series having plot points which are suspiciously similar, RahXephon stands in its own right as an excellent and thoughtful Super Robot series.

There is a Character Sheet for this series, albeit under construction. See also Eureka Seven and Star Driver, other mecha production by Studio BONES (the latter of which takes quite a few cues from Rahxephon).

Tropes used in RahXephon include:

Retrieved from "https://allthetropes.org/w/index.php?title=RahXephon&oldid=1690953"
Categories:
Cookies help us deliver our services. By using our services, you agree to our use of cookies.