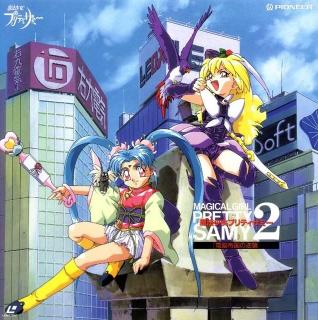 Sasami: Magical Girls Club shares some of the characters and a few minor similarities (mainly the presence of magical girls), but is otherwise completely different in every way.

The OVA series starts by introducing the magical kingdom of Juraihelm, where Tsunami and Ramia are the contenders to be the new queen. The former is rather lackadaisical and oblivious while the latter is fiercely motivated. Should be easy to guess who gets the position. However, before it can be made official, Tsunami has to select a Magical Girl champion on Earth to restore the balance between good and evil.

Her choice is Sasami Kawai, a rather ordinary girl without any big ambitions. Tsunami randomly appears and recruits her to be Earth's champion, giving her a magical rod that can transform her into Pretty Sammy and assigning a Mentor Mascot to help her along. She mostly rejects the idea because of the costume being rather lame, but ultimately has to fill the role anyway. Meanwhile, Ramia recruits a magical girl all her own with Sasami's best friend Misao, giving her the alter ego of Pixy Misa while keeping her oblivious to it through hypnosis. The intent is to disrupt Pretty Sammy enough to invalidate Tsunami's claim to the crown and thus default Ramia into the position.

While it seems rather straightforward, the OVA series has a bit of a Romantic Plot Tumor with the love triangle between Sasami's brother Tenchi (the ever-reliable Chick Magnet), Ryoko (a sort of Bottle Fairy minus the bottle), and Ayeka (a fairly cold and calculating ring leader of a Girl Posse). More focus is given to this love triangle than to the magical girl plot in the first and third episodes while the second still features Tenchi prominantly throughout.

The first episode is the origin outlined above, with Ayeka and Ryoko turned into Love-Love Monsters (big fluffy things that smother Tenchi) by Pixy Misa. The second episode has Biff Standard (a thinly veiled Bill Gates parody) try to force a standard operating system on the entire world, being used as a pawn in an attempt to destroy it as well. The third episode features aliens ending up on Earth after a meteorite collision, which have the capability to become semi-clones of the people they come in contact with. One ends up drawing from Ramia, also gaining the motive to destroy Pretty Sammy in the process.

The TV series retains most of the origin story, but diverges heavily from the OVA series. The biggest change is the removal of Tenchi, making Sasami an only child to a completely different set of parents. While the OVA series is an Indecisive Parody of Magical Girl shows (probably just a really odd one played straight), the TV series is explicitly parodying the genre. The TV series focuses mostly on Pixy Misa trying to derail Pretty Sammy through the use of summoned monsters of the week. From there, it parodies shows such as Sailor Moon while also having its own serious Myth Arc.

Another 2-part manga story appeared in an issue of the Tenchi Muyo manga. This story was based on the OVA.

Pretty Sammy is the Trope Codifier for:
Tropes used in Pretty Sammy include:
Retrieved from "https://allthetropes.org/w/index.php?title=Pretty_Sammy&oldid=1870610"
Categories:
Cookies help us deliver our services. By using our services, you agree to our use of cookies.