Science Fiction writer Gary K. Wolf, having written a number of novels such as Killerbowl and The Resurrectionist in his genre of choice, wanted his next work to be something a little different, perhaps something that had to do with his two other great loves: detective novels and comic strips. Then, one day, when watching children's morning TV for research purposes, he noticed a commercial wherein several animated kids' cereal mascots interacted with live-action children. And thus, the world of Who Censored Roger Rabbit? was born!

In these novels, human beings who look and act much like you and me live side-by-side with an oppressed minority of living, breathing cartoon characters called Toons, who look and act exactly as they do on animated cartoons and comic strips but are unable to produce sound, communicating via visible dialogue balloons, (though they can—with some effort—suppress their word balloons and speak; Jessica Rabbit does this, which makes her sexier to humans). The series features various recurring characters but otherwise has a very loose continuity, to mimic the format of old-fashioned anthology-style cartoons such as the Looney Tunes.

The series has, of course, inspired a very successful feature film. Possibly someday to be two.

A third novel exists, to be published after the release of the second movie. 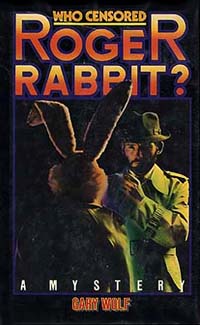 In the first book, we're introduced to our protagonist, hard-drinking, Toon-hating, Hardboiled Detective Eddie Valiant, hired by the famous comic strip star Roger Rabbit to discover why his employers, Rocco and Dominick DeGreasy, have withheld their promise of giving Roger his own newspaper strip instead of constantly playing him as a foil for their biggest star, Baby Herman. This novel is set in The Eighties and features several odd fantasy elements that those familiar only with the movie may find a bit strange, most notably the fact that in this version the Toons are not indestructible, but can create doppelgangers to do their most dangerous stunts for them. The two versions share only four characters: Eddie, Roger, Jessica, and Benny, although the last one appears as Bennie the Beetle rather than Benny the Cab. 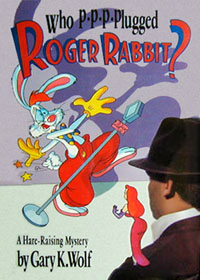 The second book is a direct sequel to Who Framed Roger Rabbit? and totally disregards any continuity established in the first book. Like the movie, this is set in 1947 and features Eddie and Roger as an Odd Couple-style ensemble, both sharing protagonist status (rather than having Eddie as the clear star of the show and Roger merely as his shifty client, as in the first book). The plot concerns famed Hollywood director David O. Selznick and his attempts to adapt the novel Gone with the Wind to film. But who will he cast as Rhett Butler, the male lead? Will it be Clark Gable, Baby Herman, or Roger Rabbit? Selznick cannot make up his mind about it! We're also introduced to Eddie's sister Heddy, who's married to a Toon, and other brother Freddy, who's been mysteriously transformed into one. Also involved are the foul doings of an evil Roger-lookalike, the smuggling of a mysterious chemical from South America, Jessica Rabbit's mysterious pregnancy and her (quite literally) "little" sister.

The first short story is very rare, but the second is available for free at the author's website.

This series contains examples of:
Retrieved from "https://allthetropes.org/w/index.php?title=Who_Censored_Roger_Rabbit%3F&oldid=1556150"
Categories:
Cookies help us deliver our services. By using our services, you agree to our use of cookies.