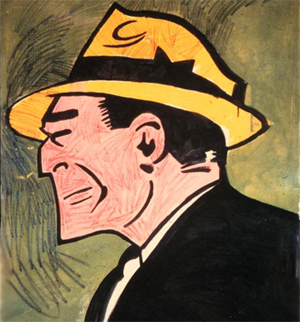 Dick Tracy, contemplating the violence that he will no doubt be inflicting.

One of the most well-known Newspaper Comics of all time, Dick Tracy, created by Chester Gould, is about the cases of a tough as nails police detective. Inspired as a Take That towards organized crime in the 1930s (indeed, the strip's first major villain, Big Boy Caprice, was an Expy of Al Capone) the series followed Detective Dick Tracy as he fights crime, as a modern day Sherlock Holmes but with a lot of emphasis on forensic methods/police procedures and the occassional space-age gadget (most notably the character's famous two-way wrist communicators).

The strip is even more famous for its strange-looking villains, whose villainy was marked with a Red Right Hand. Imagine characters with names like Flattop, Pruneface and The Brow and you'll know what they look like.

Furthermore, the strip pulled no punches with an intensity of bloody violence for its time that would impress Sam Peckinpah and Quentin Tarantino. For instance, Tracy would often shoot for the head, but the villains often had a Karmic Death; the fate of Gargles being chopped to pieces in a glass factory by falling broken pieces of sheet glass shattered in a gun battle is a good example.

However, the strip went awry starting the 1960s with Tracy getting a spaceship called the Space Coupe and eventually going to the moon to meet the Moon People. When the series returned to Earth, with futuristic Moon people technology like ray guns and air cars that look like flying trash cans, Gould struggled to adapt the strip to modern times. Concessions included introducing a hippie sidekick for Tracy and briefly having Tracy grow a moustache; the former stuck around for nearly a decade before being killed off, the latter was forcibly shaven off within several months of it being grown. But most notably, the strip became bitter and cynical, as Gould used Tracy to condemn Supreme Court rulings that expanded the rights of the accused, which Gould (via Tracy) condemned as handcuffing police officers from beating the shit out of criminals and suspected criminals in order to force them to confess.

Finally, Gould retired in 1977 and mystery writer Max Allan Collins took over writing and did his best to restore the best of the strip's past. Silly characters like Moon Maid and the above mentioned hippie sidekick were Killed Off for Real, legacy versions of popular (and deceased) villains were introduced (and in the cases of some, like Pruneface, flashback stories were written to bring them back) and the gadgets were scaled back to a more reasonable level. In addition, he also had Tracy get his complaints about reforms to due process out of his system when he temporarily resigned from the force to become a private detective. Sadly, Collins was forced off the strip in the 1990s, leading to the series descending to being So Okay It's Average under succeeding writer Mike Kilian, and then going completely and totally insane when Kilian died and longtime artist Dick Locher took over the writing duties, as some have observed.

In 2011 Locher retired and a new team headed by writer Mike Curtis and DC/Marvel artist Joe Staton took over the strip. The restart already has fans talking of a renaissance, and it's hard to dispute that. Staton & Curtis have placed a strong emphasis on continuity and Character Development, and tied all ages of the strip into the main canon --- even the Moon Age -- during a recent storyline arc. In addition, Dick Tracy has crossed over with multiple comic strips, most notably Little Orphan Annie, thus opening up an Expanded Universe. Toss in the artwork (not a surprise, given Staton's pedigree) and it could be argued that Staton & Curtis have done to Dick Tracy what Russell T. Davies and Steven Moffat have done to Doctor Who.

The strip has been depicted with numerous media adaptations: movie serials, the 1961/1962 TV series, The Dick Tracy Show, cartoons, and a full-length 1990 theatrical film starring Warren Beatty, whose specific tropes are discussed here.

Tropes used in Dick Tracy (comic strip) include:
Retrieved from "https://allthetropes.org/w/index.php?title=Dick_Tracy_(comic_strip)&oldid=1795295"
Categories:
Cookies help us deliver our services. By using our services, you agree to our use of cookies.