Everything About Fiction You Never Wanted to Know.
(Redirected from Yami no Matsuei)
Jump to navigation Jump to search 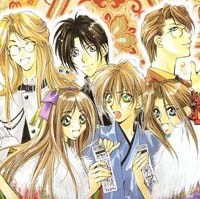 Asato Tsuzuki is a Shinigami who has been working in the afterworld for 70 years (with a low wage), investigating cases related to unnatural deaths or deaths that refuse to produce. Although he is (very) capable, he is constantly in trouble because of his laid back and spacey attitude, and the little fact that can't retain a partner. Things seems to improve when Tszuki is assigned to work with the new shinigami Hisoka Kurosaki, a teenager with a very serious attitude, in contrast with Tsuzuki's playfulness. Unfortunately, in their first case together they cross paths with the insane Doctor Kazutaka Muraki, a man who has gotten supernatural powers in very questionable ways. The doctor is involved in a lot of dirty business (including the death of Hisoka), and now wants Tsuzuki...

Began as a Manga in 1997 and was made a 13 episode Anime in 2001. The author took a hiatus in 2003, leaving the series unfinished until January 2010, in which volume 12 was released. The series is, however, being continued as of recent notification.[when?]

The English language release is titled Descendants of Darkness. The original Japanese name was Yami no Matsuei.

Tropes used in Descendants of Darkness include:
Retrieved from "https://allthetropes.org/w/index.php?title=Descendants_of_Darkness&oldid=1716326"
Categories:
Cookies help us deliver our services. By using our services, you agree to our use of cookies.