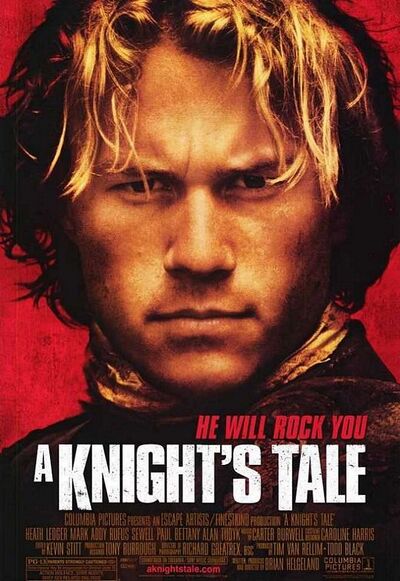 A sports movie about a struggling underdog who, through sheer pluck and hard effort, beats the rich and established players at their own game, gets the girl, wins the respect of the big boss and gets to humiliate his rival in front of a cheering crowd in the big final match. Pretty standard, then. Except... oh yeah, it's set in Medieval Europe. The sport is jousting. The struggling underdog is a peasant posing as a noble knight. The big boss is Edward of England, aka the Black Prince.

A Knight's Tale stars Heath Ledger as William Thatcher, Paul Bettany as Geoffrey Chaucer (yes, that one) and a whole bunch of people you recognise from cool stuff and kind of like, even though they've never quite hit the big time (including cast members from Rome, Firefly, The Full Monty, Game of Thrones and Neil Gaiman's Neverwhere).

A major, completely unashamed Anachronism Stew. Features 14th-century courtiers dancing to David Bowie and peasants doing the stomp-stomp-clap cadence from We Will Rock You (which was actually filmed by the second unit as a joke, but was considered funny enough to use anyway).

Tropes used in A Knight's Tale include:
Retrieved from "https://allthetropes.org/w/index.php?title=A_Knight%27s_Tale&oldid=1834054"
Categories: