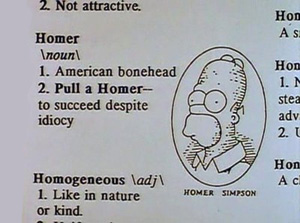 TV: HIGH SCHOOLER FOILS BANK ROBBERY WITH NOTHING BUT BOW AND ARROW!
Yakumo: Wow, that's impressive.
Tenma: That's not what was supposed to happen at all!

A character becomes celebrated for heroism. Problem is, it isn't false modesty this time. He really didn't do anything special.

In either flavor, public acclaim that just won't go away is the main complication. The subsequent plot is a good showcase for examining the fiber of the accidental hero's character and to spin a little yarn about how people need heroes.

Compare And You Thought It Was a Game, Cowardly Lion, Framed for Heroism, God Guise, Nominal Hero, and Spanner in the Works. May result in Broken Pedestal.

This trope is the spiritual opposite of Nice Job Breaking It, Hero.

Examples of Accidental Hero include:

Wise Old Bird: In a moment we realised the truth. Just because the little bitches liked us, it didn't mean to say that we had to like 'em back. And that night we rounded up every last one of the little creeps.