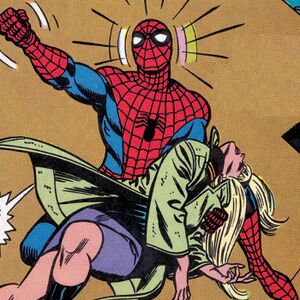 Often, a hero needs more of a reason to keep on fighting than just to save the day. He needs to know that it's fairly Serious Business. That's why, on occasion, someone close to him will die for generally no other reason than for the hero to (W)angst over his inability to save the loved one, driving him to protect everyone else he can.

Sometimes, this happens because the hero in question is carrying the Idiot Ball for the day, in which case the hero has no reason to blame himself, but will do so anyway simply because it's "good for the hero."

The sacrificed character is frequently a Disposable Woman, but it could be a whole Doomed Hometown. When the corpse is left for the hero to stumble upon, it's Stuffed Into the Fridge. When it happens over and over again to the same hero, it's the Cartwright Curse. See also Dead Little Sister, My Greatest Failure and Survivor Guilt. When they die during a hero's backstory or initial appearance, it's Death by Origin Story.

Note: While many Gwen Stacys are also Lost Lenores not every Lost Lenore is a Gwen Stacy. Whoever lost Lenore doesn't necessarily blame themselves for the death, but this feeling of self-blame and assumed responsibility is a key defining criterion for a Gwen Stacy.

Examples of I Let Gwen Stacy Die include:

Retrieved from "https://allthetropes.org/w/index.php?title=I_Let_Gwen_Stacy_Die&oldid=1871958"
Categories:
Cookies help us deliver our services. By using our services, you agree to our use of cookies.